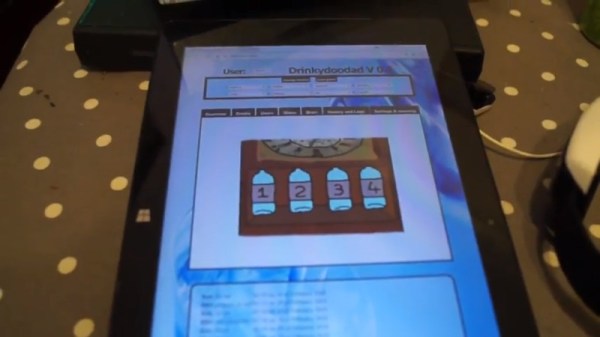 Barbots are a popular project around these parts. With a few pumps and a microcontroller or two, it’s possible to build something that can approximate mixing a drink. If you’ve got the patience and attention to detail, you can probably even get it to the point where it doesn’t just end up as a leaking wet mess on your mantlepiece. [Robert] has taken his build a step further by adding mind control.

To achieve this feat, a Mindflex EEG headset is pressed into service. This picks up brainwaves from the user, and processes them into two output values of concentration and meditation. Through some careful hacking, it’s possible to retrieve these values. [Robert] sends the values over Bluetooth to the barbot controller for processing. Concentration values over a certain threshold are used to cycle through the drink selection, while meditation values are used to confirm the order. Once it’s made, a voice command to “hit me” will see the drink served.

It’s a tidy build that adds a bit of fun to an already cool project. We’d love to see this taken up several levels of complexity to the point where you can directly order the drink you want, just by the power of thought. If your university-grade research project is at that level, be sure to let us know. Else, if you’re interested in how the barbot came to be, check out [Robert]’s earlier work.