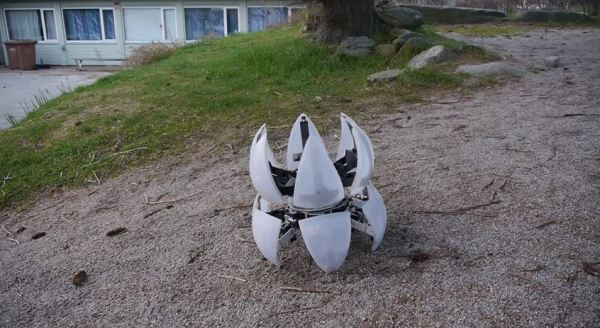 END_OF_DOCUMENT_TOKEN_TO_BE_REPLACED

[Zenta] has been building his MorpHex rolling hexapod for nearly a year now, and good things come to those who wait. After a ton of development and fabrication, [Zenta] finally has his mechanical jellyfish robot rolling and walking around.

This isn’t the first time we’ve seen [Zenta]‘s MorpHex robot in action. A year ago, we saw the beginnings of the project with that included 25 servos mounted on a custom chassis. Last winter, the top hemisphere of the MorpHex was added, but rolling locomotion was still on the drawing board. A lot has changed since then, and now [Zenta]’s robot can roll or walk across the floor.

From the video (available after the break), we see that [Zenta] kept the one degree of freedom for the panels on the upper cylinder. He’s thinking about making the MorpHex more symmetrical; just copying the plans for the bottom hemisphere onto the top, for instance. This plan would allow the MorpHex to roll in a straight line, so we can’t wait to see what [Zenta] cooks up next.