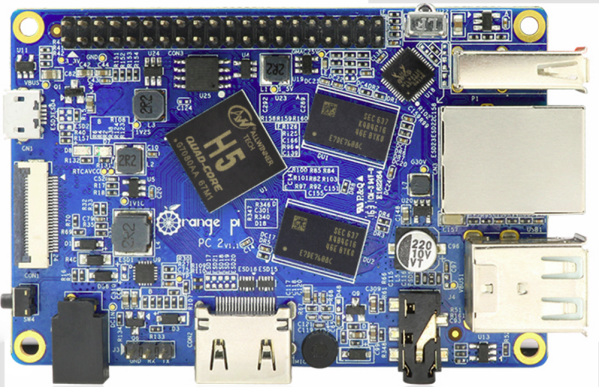 A few years ago, someone figured out small, cheap ARM Linux boards are really, really useful, extremely popular, sell very well, blink LEDs, and are able to open the doors of engineering and computer science to everyone. There is one giant manufacturer of these cheap ARM Linux boards whose mere mention guarantees us a few thousand extra clicks on this article. There are other manufacturers of these boards, though, and there is no benevolent monopoly; the smaller manufacturers of these boards should bring new features and better specs to the ARM Linux board ecosystem. A drop of water in a tide that lifts all boats. Something like that.

This week, Orange Pi, not the largest manufacturer of these small ARM Linux boards, has released two new boards. The Orange Pi Zero is an inexpensive, quad-core ARM Cortex A7 Linux board with 256 MB or 512 MB of RAM. The Orange Pi PC 2 is the slightly pricier quad-core ARM Cortex-A53 board with 1 GB of RAM and a layout that can only be described as cattywampus. We all know where the inspiration for these boards came from. The price for these boards, less shipping, is $6.99 USD and $19.98 USD, respectively.

The Orange Pi Zero uses the Allwinner H2 SoC, and courageously does not use the standard 40-pin header of another very popular line of single board computers, although the 26-pin bank of pins is compatible with the first version of the board you’re thinking about. Also on board the Orange Pi Zero is WiFi provided by an XR819 chipset, Ethernet, a Mali400MP2 GPU, USB 2.0, a microSD card slot, and a pin header for headphones, mic, TV out, and two more USB ports.

The significantly more powerful Orange Pi PC 2 sports a quad-core ARM Cortex-A53 SoC coupled to 1 GB of RAM. USB OTG, a trio of USB 2.0 ports, Ethernet, camera interface, and HDMI round out the rest of the board.

Both of Orange Pi’s recent offerings are Allwinner boards. This family of SoCs have famously terrible support in Linux, and the last Allwinner Cortex-A53, that we couldn’t really review, was terrible. Although the Orange Pi Zero and Orange Pi PC 2 are new boards and surely software is still being written, history indicates the patches written for this SoC will not be sent upstream, and these boards will be frozen in time.

If you’re looking for a cheap Linux board with a WiFi chipset that might work, The Orange Pi Zero is very interesting. The Orange Pi PC 2 does have slightly impressive specs for the price. When you buy a single board, though, you’re buying into a community dedicated to improving Linux support on the board. From what I’ve seen, that support probably won’t be coming but I will be happy to be proven wrong.