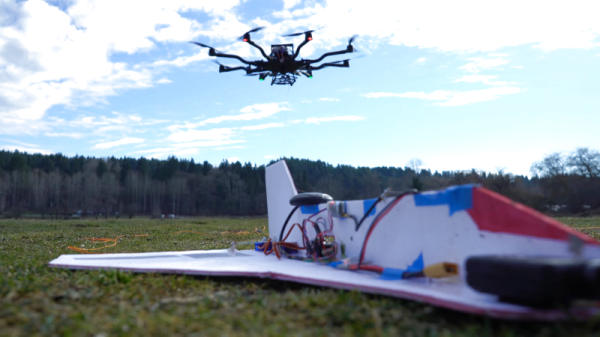 There are a few open source autopilots available these days for quadcopters and fixed wing aircraft. Two of the most popular are ArduPilot and PX4, however neither is officially capable of working with unpowered aircraft. Despite this, [rctestflight] decided to run some experiments to see just how PX4 would fare when controlling a drone-launched shuttle glider.

The glider is a simple design built from foam board, controlled with two elevons, and fitted with a third servo to handle its release from the tow drone. It’s fitted with a Pixracer autopilot module and a Dragonlink telemetry link to the ground control laptop.

Initial testing was unsuccessful, with the drone ignoring return-to-home commands, and only responding to waypoints. After some further experimentation, performance improved. Testing and tweaking is the name of the game, and while the attempt to fly the glider into the back of the trailer failed, overall the project shows promise.

It’s impressive to see the glider tracing out perfect circles on the map under autopilot control. While it’s not officially supported, [rctestflight]’s work shows that it’s possible to run PX4 on a glider and have some success doing it. Future plans involve weather balloons and high altitude work, and we can’t wait to see the results.

PX4 has been used in a wide variety of projects, and can be used with even quite unusual aircraft. Video after the break.