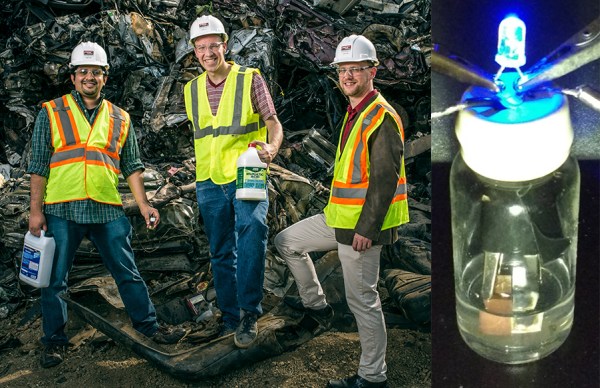 We got quite a few tips in about a paper from Vanderbilt about a cool scrap metal battery they’ve been playing with. They made some pretty bold claims and when we fed the numbers in they pretty much say they’ve got a battery you can make at home, that can hold half as much as a lead acid, can be made out of scraps in a cave (even if you’re not Tony Stark), charge super fast,and can cycle 5,000 times without appreciable capacity loss.  Needless to say that’s super cool.

Of course, science research is as broken as ever and the paper was hidden behind a paywall. Through mysterious powers such as the library and bothering people we were able to get past this cunning defense and read the paper. Unfortunately the paper reads more like a brag track than a useful experimental guide on how to build the dang battery. It’s also possible that our copy was missing some pages. Anyway, we want to do science!

Anyway, here’s what we know. The battery is based on an ancient battery called the Baghdad Battery. The ancient battery supposedly used iron and copper with a mystery electrolyte. The scrap battery, however, is made from scrap iron and scrap brass. The iron makes sense, but why brass? Well, brass has copper in it, and you can still get at it chemically even if it’s alloyed.

To that end, the next step was to throw some oxygen atoms in with those pesky Fe and Cu ones. The goal is to get a redox reaction going. If you do it right you can achieve pseudocapacitance. To to this the researchers used “common household chemicals and voltages” to anodize the iron and copper inside the brass. The press photo have them holding a gallon of muratic acid, if that helps. We don’t know, but if they can jam a few oxygen atoms in there then so can we!

After that it’s all about sitting the electrodes in a bath of potassium hydroxide. We guess you can scrape the inside of an AA for that. Anyway, the paper’s light on process but the battery seems really cool. They’re not pursuing this research for commercialization, instead going the OSHW route. They hope to get to the point where anyone can just grind up a bunch of scrap steel and brass, maybe throw it in a birdcage, anodize it, and get a super long life battery for grid use for less than a lead acid. If any of you manage to build one of these drop us a tip!