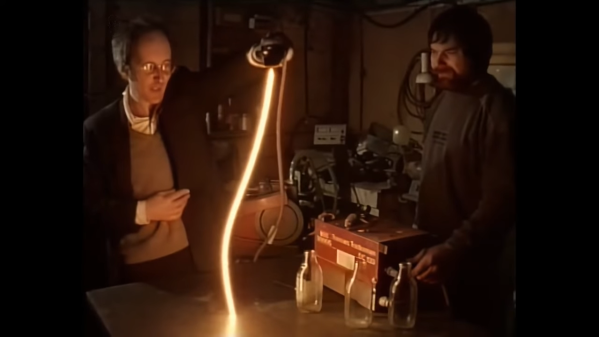 Normally, when we pick out something to carry the “Retrotechtacular” banner, it’s a film from the good old days when technology was young and fresh, and filmmakers were paid by one corporate giant or another to produce a film extolling the benefits of their products or services, often with a not-so-subtle “celebrate the march of progress” undertone.

So when we spied this remastered version of The Secret Life of the Electric Light,  an episode from [Tim Hunkin]’s fabulous educational The Secret Life of Machines TV series, we didn’t really think it would be good Retrotechtacular fodder. But just watching a few minutes reminded us of why the series was must-see TV back in the 1990s (when it first aired widely here in the States), especially for the budding geek. When viewed with eyes more used to CGI animations and high production values, what [Tim] and his collaborator, the late [Rex Garrod], accomplished with each of these programs is truly astounding. Almost every bit of the material, as well as the delivery, has an off-the-cuff quality to it that belies what must have taken an enormous amount of planning and organization to pull off. [Tim] and [Rex] obviously went to a lot of trouble to make it look like they didn’t go to a lot of trouble, and the result is films that home in on the essentials of technology in a way few programs have ever managed, and none since. And the set-piece at the end of each episode — often meeting its pyrotechnic destruction — always were real crowd-pleasers. They still are.

We have to say the remastered versions of The Secret Life episodes, all of which appear to be posted at [Tim]’s YouTube channel, look just great, and the retrospectives at the end of each episode where he talks about the travails of production are priceless. Also posted are his more recent The Secret Life of Components, which is a treasure trove of practical tips for makers and backyard engineers that’s well worth watching too.