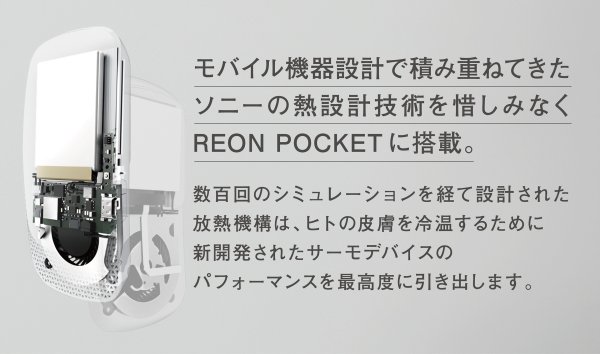 With another summer of heatwaves leaving its mark on our planet, finding a way to stay cool during the day isn’t an easy task. From the morning and afternoon commute in public transport, to busy crowds outside during lunch hour, there are many times when you cannot just find a place inside an airconditioned room to deal with the heat. Exactly for this purpose Sony has successfully completed a kickstarter (in Japanese) on its corporate ‘First Flight’ crowdfunding platform for the Reon Pocket.

Many people probably aren’t aware of Sony’s crowdfunding platform, but it’s a way to gauge the interest from the public for more ‘out there’ products, which do not fit Sony’s usual business model. In this case the Reon Pocket is a Peltier-based device which is placed against the back of one’s neck, from where it can either lower or increase the body’s temperature, reportedly by -13 ℃ and +8.3 ℃ respectively.

Covered in more detail by Engadget and its Japanese sister site, the reported 24 hour battery life refers to the Bluetooth link that connects the device with one’s smartphone, whereas the battery lasts under two hours with the peltier element active. This is probably not too shocking to anyone who knows how a peltier element functions, and how much electricity they consume.

Still, the basic concept seems sound, and there are functioning prototypes. While a 2-hour battery life isn’t amazingly long, it can be just the thing one needs to keep one’s cool during that 15 minute walk to the office in a three-piece suit, without needing a shower afterwards. The device isn’t expensive either, with a projected ¥12,760 (about $117) supplied. Naturally the device will only be on sale in Japan.