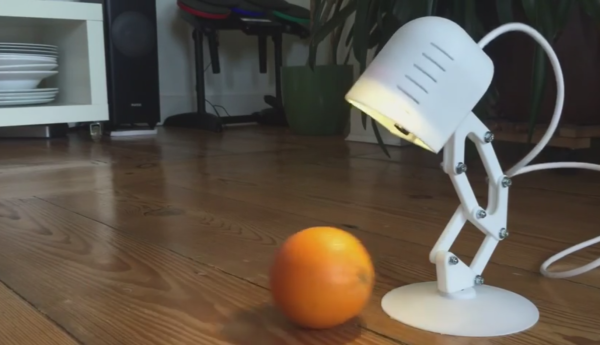 Remember the Pixar lamp? Well, [Rick] from [Phlegmatic Prototyping] decided to build his own.

It’s actually the third iteration of the project, the first being made from a cheap camera sensor, an ATMega328, a computer mouse and laser cut parts. The second iteration… sounds like it was the Pixar Lamp — and due to possible copyright infringement [Rick] decided not to show it off. Which brings us to number three, Robolamp the Third.

Quite obviously not the Pixar lamp now, [Rick] designed the whole thing in 3D CAD and had it printed at Shapeways. It uses a CMUCAM5 vision sensor that detects color hues, allowing the lamp to track colorful objects, like an orange, which ends up looking painfully cute. Just take a look at the video.