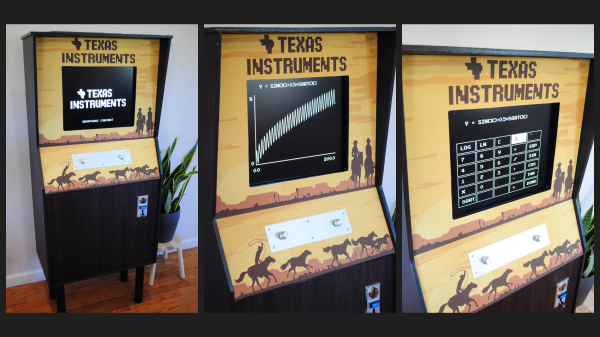 Longtime hacker [Peter Jansen] was so impressed with a piece in The Onion from last year that he decided to build this coin-operated Texas Instruments graphing calculator console on a whim (video below the break — warning vertical orientation). 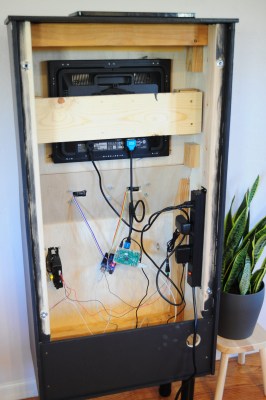 With nothing more to go on than the fake mock-up pictured from the original satirical article, [Peter] was able to scale the dimensions from the photo making a few reasonable assumptions. He built the project over the holidays, enlisting his father and daughter as helpers. The cabinet is framed in 2×3 lumber and faced with wood veneer covered plywood and vinyl overlays for the graphics.

The computing power is from a Raspberry Pi with an Arduino Uno serves as an I/O processor. It was a bit tricky to control a calculator with only two knobs, but he makes it work. However, at 25 cents per plot with no apparent hard-copy capability, this console calculator might be a bit pricey for all but casual plotting over a few beers at the local pub.

You might remember [Peter] from some of his hacks we featured over the years, like his home-brew CT scanner or placing fourth in the first Hackaday Prize contest in 2014 with the open sourced tricorder project.