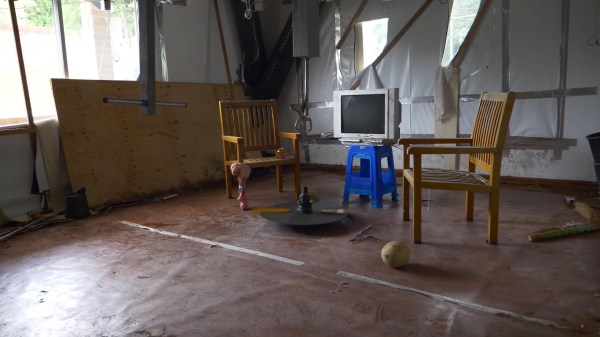 Beyblades were a huge craze quite some years back. Children battled with spinning tops in small plastic arenas, or, if their local toy stores were poorly merchandised, in salad bowls and old pie dishes. The toys were safe enough, despite their destructive ethos, by virtue of being relatively small and lightweight. This “Beyblade” from [i did a thing] is anything but, however.

The build begins with a circular saw blade over 1 foot in diameter, replete with many angry cutting teeth that alone portend danger for any individual unlucky enough to cross its path. Saw blades tend to cut slowly and surely however, so to allow the illicit Bey to deal more traumatic blows, a pair of steel scraps are welded on to deliver striking blows as well. This has the added benefit of adding more mass to the outside of the ‘blade, increasing the energy stored as it spins.

With the terrifying contraption spun up to great RPM by a chainsaw reeling in string, it’s able to demolish cheap wood and bone with little resistance. Shrapnel is thrown in many directions as the spinner attacks various objects, from a melon to an old CRT TV. We’d love to see the concept taken further, with an even deadlier design spun up to even higher speeds, ideally with a different tip that creates a more aggressive motion across the floor.

As aggressive as this saw blade looks in action, not all are so scary. Even paper can do the job under the right conditions. Video after the break.