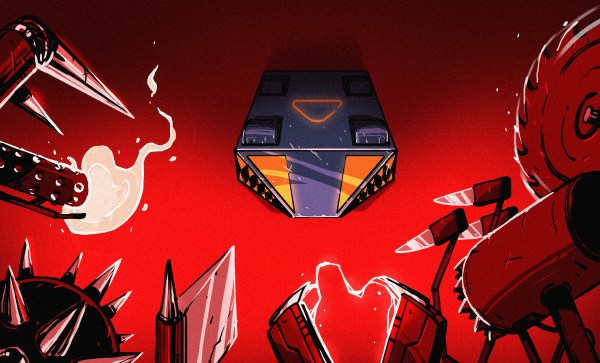 Building a robot that can do anything well is a tough challenge. Building one that can stand up to another robot trying to violently put it out of commission is an even harder task. But it makes for some entertaining television! It is this combination that thrust a few creative robot building teams into the world of Robot Wars.

SMIDSY, short for the insubstantial excuse heard by many a motorcyclist “Sorry Mate, I Didn’t See You”, is a robot that competed in several seasons of the British incarnation of the Robot Wars TV show. It wasn’t the most successful of machines because its weapons were slightly weedy compared to some of the competition, but it was one of the more robust and reliable platforms on the circuit at the time thanks to its combination of simple uncomplicated construction and extremely good design. I had the pleasure of being on the team that built and competed with SMIDSY and carry from it some of the more found memories from that decade.

A few weeks ago I learned that a friend from that period in my life had died following an illness. I hadn’t seen [Mik] for a few years as our lives had drifted apart, but if we were to turn back the clock nearly a couple of decades you would find us and about twenty other fellow members of the Ixion British motorcyclist’s mailing list hard at work building a Robot Wars robot.

The hard work and determination make this a great story. But even more so it’s fun to look back on the state of the art of the time and see some clever workarounds in a time when robot building was just starting to be approachable by the average engineer.