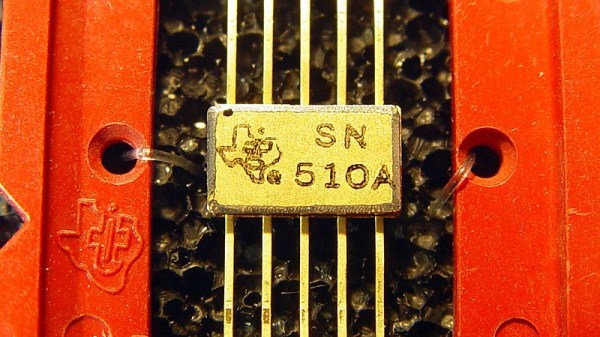 Over six decades of integrated circuit production we’ve become used to their extreme reliability and performance for a very reasonable price. But what about those first integrated circuits from the early 1960s? Commercial integrated circuits appeared in 1961, and recently Texas Instruments published a fascinating retrospective on the development of their first few digital ICs.

TI’s original IC product on the market was the SN502, a transistor flip-flop that debuted at $450 (about $4100 today), which caught the interest of NASA engineers who asked for logic functions with a higher performance level. The response was the development of the 51 series of logic chips, whose innovation included on-chip interconnects replacing the hand interconnects of the SN502. Their RCTL logic gave enough performance and reliability for NASA to use, and in late 1963 the Explorer 18 craft carried a telemetry system using the SN510 and SN514 chips into orbit. 52 and 53 series chips quickly followed, then in 1964 the 54 series TTL chips which along with their plastic-encapsulated 74 series equivalents are still available today.

Considering that in 1961 the bleeding edge of integrated circuit logic technology was a two-transistor chip with hand interconnects, it seems scarcely conceivable that by ten years later in 1971 the art had advanced to the point at which the first commercially available microprocessors would be produced. It’s unlikely that many of us will stumble upon any of the three-figure SN1-series logic chips, but to read about them is a fascinating reminder of this pivotal moment in the history of electronics.