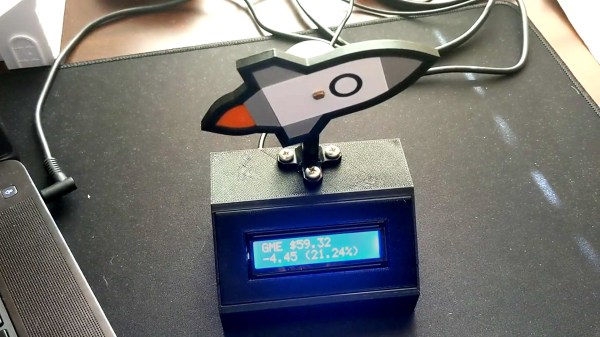 If you’ve been on the internet lately, you’ve been bombarded by stories about retail traders attempting to beat Wall Street at their own game by trying to force a short squeeze on GameStop stock. It’s inspired memes, songs, and all manner of political discourse, along with this cute stock-tracking device built by [dickdemodickmarcinko].

The device is based on the typical exhortation that a given stock or cryptocurrency is going “to the moon”, i.e. skyrocketing upwards to great heights. IT consists of an ESP8266 in a 3D printed housing, with a HD44780 alphanumeric LCD displaying the GME stock price and percentage change over time. The microcontroller also controls a stepper motor, which rotates a 3D-printed rocketship up or down relative to the stock’s price changes. If it’s pointing straight up, prospects are good for those holding the stock!

Whether or not the GME squeeze happens, the build is a fun way to learn about electronics and the stock market at the same time, and could be readily repurposed to track other markets in future. We’ve featured other price trackers before, like this traffic light keeping an eye on Bitcoin. Video after the break.