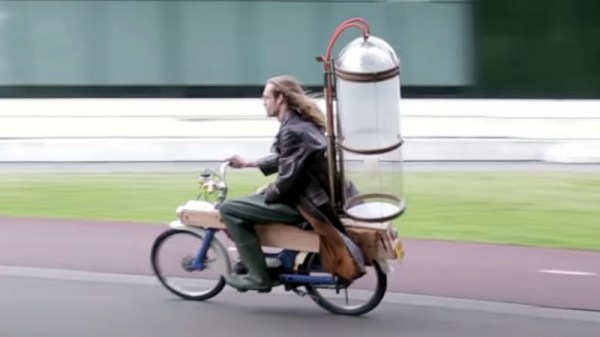 The energy to power a motorcycle has to come from somewhere, be it a power station, a solar panel, a gas station, or a hydrogen plant. There have been many ways to reduce the cost of extracting that energy over the years, but we think [Gijs Schalkx] may have hit upon one of the cheapest and simplest we’ve ever seen. It may not be free gas, but it is free swamp gas! His Uitsloot (we think that’s Dutch for “From the ditch”) motorcycle gets its power from methane generated in the sediment at the bottom of the Netherlands’ many waterways.

At its heart is a venerable Honda Cub moped, we’re guessing of the 50 cc version. On its pillion is a large clear container, inside of which is a balloon filled with gas. He doesn’t go into details in the video below the break, but we’re guessing he’s injecting the gas into the Honda’s airbox from which the engine can suck the gas/air mixture. We like his gas collector, a large inner tube with a collector funnel in its centre that floats on the water. He dons some waders and pokes the sediment with a long stick to release bubbles of methane. He then uses a long hose and a bicycle pump to inflate the balloon with the collected gas. We see him zipping around the streets of Arnhem under this unconventional power, though sadly we don’t see how far a full balloon will take him.

There’s a discussion to be had as to the environmental credentials of this project, but we think given that the naturally generated methane which would find its way into the atmosphere eventually has a greater effect on the climate than the CO2 produced by the engine, he may be onto a winner. It is however not a system that would scale to more than a few drivers poking at bogs with a stick.