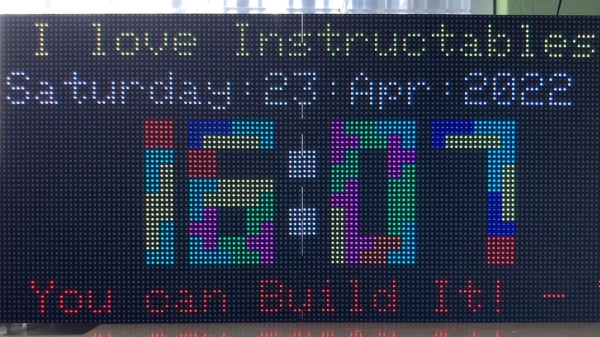 Tetris is arguably one of the most popular video games of all time, and its famous bricks have become cultural icons in themselves, as seen in this clock build from [The Electronic Engineer].

The basic concept of the Tetris clock is that falling bricks stick together in the shape of numbers to display the time. In this case, the clock is based on the version created by [Brian Lough] which we featured previously. It relies on an RGB LED matrix as a display.

However, the build has had a few upgrades courtesy of [The Electronic Engineer]. With the help of an I2S audio breakout board, the clock can play sounds at various times of day. It’s currently set up with clips from various cartoons announcing lunch and coffee break times. There’s also a web interface added in for configuration purposes, and some text tickers too.

It’s fun to see a popular open project get some upgrades as others dive in to build their own version. We’ve seen some other fun Tetris clocks before, too. END_OF_DOCUMENT_TOKEN_TO_BE_REPLACED