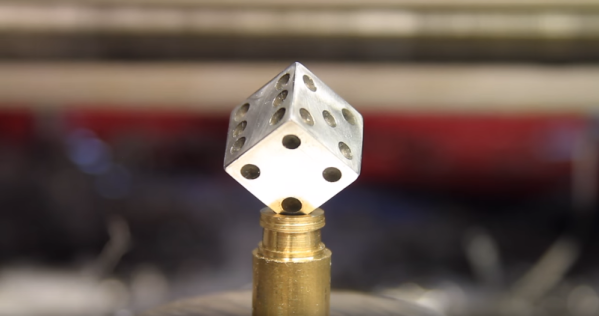 [Tim] was tired of using his lathe to turn round things. He decided to make a gaming die—something that’s iconically square—out of cylindrical scrap. As it turns out, this is possible to do on a lathe with a three jaw chuck. [Tim] discovered that the bevel on the jaws will hold a cylindrical puck of scrap sideways while he squares off the round sides into faces.

Turning a cube on a lathe looks pretty fiddly, so we applaud [Tim]’s lovely handiwork even more. As you’ll see in the video down below, things were going gangbusters until he went to make the last facing cut. Maybe the tool wasn’t lined up just so, or something was off in the chucking, but the first pass made a bit of a gouge in the stock. Looks like it was easy enough to fix, though. After four 90° turns and facing cuts, he had a nice looking rough cube to work with.

This is a regulation-sized die, so the next step was to trim it down to 16mm³. Then it was time to sand, polish, and add the dots. To lay them out, [Tim] sprayed the cube with layout fluid and scribed unique line patterns on each face. Then he drilled the indentations and filled them in with aluminium black.

Most of the dice we see are electronic, like this extremely random pair and these PIC-driven LED dice. We’d like to see [Tim] make a second D6 so he has a pair. And then make a D20. Please?