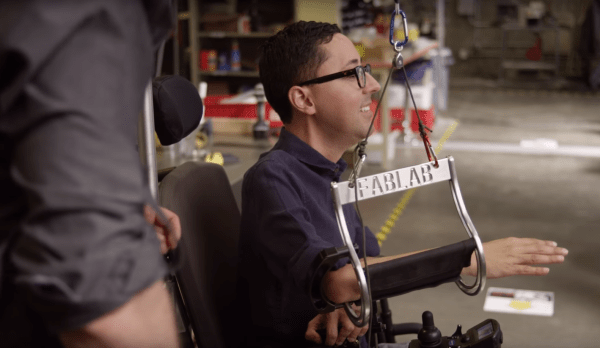 If building the James Webb Space Telescope and F/A-18 fighter jets aren’t enough reasons to work for Northrop Grumman, there’s always the FabLab – the company sponsored hackerspace. It’s a place where anything goes and everything is possible, including giving the gift of art back to a stranger in need.

The video below tells the story of [Raul Pizarro], a young man and gifted artist. Diagnosed as a child with muscular dystrophy, [Raul] was getting to the point where the progressive weakening of his muscles was making it difficult to hold up his arm. [Raul]’s art was slipping away – until [Tony Long] caught wind of the story, that is. [Tony] runs the FabLab, and once he put out the word to his colleagues he got a hackathon together to work on solutions for [Raul].

What they came up with was an overhead support system with a tool balancer and custom articulated sling to reduce the effect of gravity and support [Raul]’s arm. To compensate for his reduced range of motion, they also built an easel with actuators that can raise and lower his canvases and position them where he needs them. It looks like the FabLab team paid special attention to making everything as smooth and stable as possible, and as a result [Raul] is back to doing what he does best. Oh, and if [Tony] and the FabLab sound familiar, it might be because he played host when our own [Mike Szczys] visited Northrop last year.

We really like to see hacks that help mankind as a whole, but there’s something special about a bunch of strangers coming together to help just one man too. Hats off to [Tony] and his FabLab team for pulling off a great hack and giving [Raul] back his art.