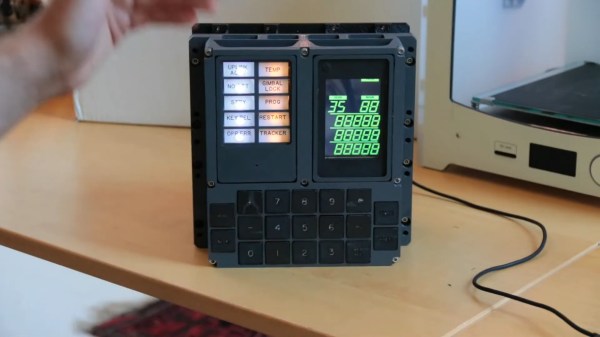 It’s hard to say what exactly it is about the Apollo DSKY that captures so many hackers’ imaginations. Whatever it is, the “Display and Keyboard” unit from the Apollo Guidance Computer has inspired dozens of teardowns, simulations, and reproductions over the years, to varying degrees of success. But this mechanically faithful DSKY replica really knocks it out of the park in terms of attention to detail.

The product of [M. daSilva], this DSKY replica takes a somewhat different path than many of the others we’ve seen. By working from as many original documents as possible, he was able to reproduce the physical size and shape of the DSKY very accurately — no mean feat when working from copies of copies of the original paper prints. Still, the details that are captured, like the gussets and reinforcements that were added to strengthen the original die-cast parts, really make this DSKY look the part. It’s functional, too, thanks to a Raspberry Pi running VirtualAGC, with a Nextion 4.3″ LCD display standing in for the original electroluminescent display. We were surprised to learn the DSKY had a port for nitrogen purging the case; check out the video tour below for that and other tidbits.

Of course, just because [M. daSilva] chose to concentrate on dimensional accuracy for this go-around doesn’t preclude more faithful electronics in the future. Perhaps he can team up with [Ben Krasnow] or [Fran Blanche] and really make this a showpiece.