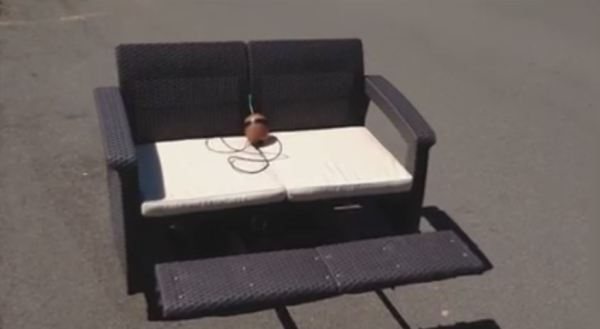 While you might not be able to tell from the picture, that outdoor love seat has wheels underneath it. And that Coconut — yeah — It controls it.

We’re starting to like this [Rodger Cleye] fellow. First he brings us the awesome [Marty Mcfly] quadcopter-hoverboard — and now this. He had originally converted his old recliner into a RC comfortable transportation chair in attempt to sell it at a garage sale, and after that decided a one-seater was just too boring. It’s much more fun to lounge with a friend while cruising down the street in your love seat.

It runs off of a 24V DC system with two 15aH SLA batteries. This gets it going to about 5mph, and the battery lasts well over 2 hours. The coconut has a straw sticking out of it which is actually the joystick — a very discrete control unit!

Still not satisfied, he decided to throw on a 25W audio system as well, so they can play their Hawaiian music while weirding out the neighbors. Take a look after the break.