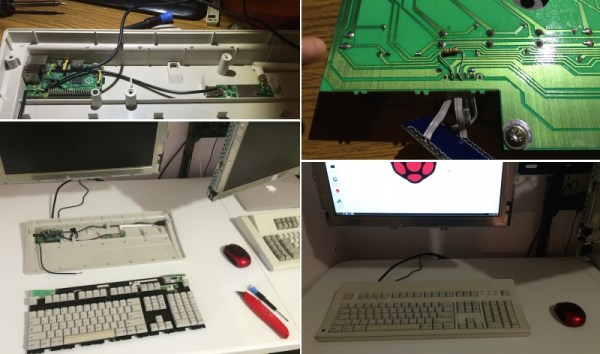 Many of our readers are familiar with the gold standard of classic PC keyboards – the bunker with switches known as the IBM Model M. The Model M’s Apple contemporary is the Apple Extended Keyboard and they are just as highly sought-after by their respective enthusiasts. Though discontinued almost 25 years ago and incompatible with anything made in the last 15, the codenamed “Saratoga” is widely considered the best keyboard Apple ever made.

[Ezra] has made a hobby of modernizing these vintage heartthrobs and rescuing them from their premature obsolescence. In a superbly documented tutorial he not only shows how to convert them to USB (a popular and trivial hack), but teaches you how and where to smuggle a Raspberry Pi in as well.

After disassembly, the project requires only a little bit of chisel and Dremel work before the soldering iron comes out. [Ezra] was fairly meticulous in removing or redirecting the Pi’s connectors and hardwiring the internals. Only 3 pins need to be traced from the original keyboard and [Ezra]’s ADB–>USB Rosetta Stone of choice is the Hasu Converter running on a Atmega 32u4 clone. Balancing cost, range, and power draw from the Pi, he settled on the TP-LINK WN722N for his WiFi solution which is also tucked away inside the case. A single pullup resistor to finish it off and [Ezra] was delighted to discover it worked the first time he plugged it in.

Keyboards from this era use actual momentary switches that audibly click twice per keypress. In our world of screens-as-keys celebrating the lack of tactile constraints, using beasts like the Model M or the AEK to force transistors to do your bidding is like racking a shotgun during a game of lasertag – comically obtuse but delightfully mechanical.

If you are looking to expand on [Ezra]’s tinkering, he has already made a wishlist of additions: a toggle switch to lobotomize the Pi back into a plain USB keyboard, an internal USB hub, and a power switch.

Hear the video of an AEK in action after the break (or loop it to sound productive while you nap).