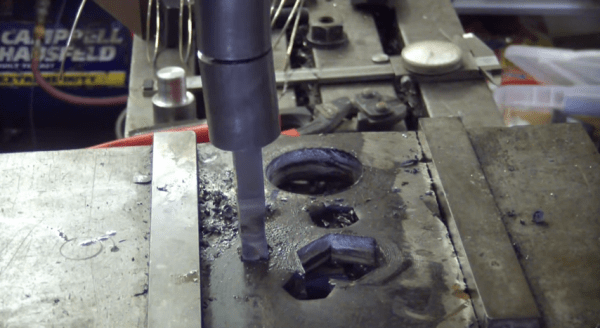 There are times in a man’s life when he needs to drill a square hole through an 8mm thick piece of steel. If that man doesn’t have one or two thousand dollars to spend on commercial tooling to do this, he might just shrug his shoulders and make do with round holes. But if that man is [Chris], he rolls up his sleeves and makes his own tool to drill square holes with a rotary broach.

This tool that [Chris] has named the Wobble Drive drills a square hole by applying force to each of the corners of a square bit one a time. How, you might ask, did he achieve this? With a two-part tool and the power of offset driving. He took a cylindrical chunk of steel and bored a little cup for a ball bearing to move around in. He didn’t have one rolling around his tool box, so he liberated one from a 2209 double row self-aligning cylindrical bore with a screwdriver. Then he hammered a square rod of steel into a hole in the other end and made the rod’s bottom a little bit concave on the grinding wheel. He also took a little off the sides to aid the weeble wobble action. A second steel cylinder with a ball bearing cup sits in the chuck of his Bridgeport mill and wobbles the tool bit through the power of a 1/4″ offset.

[Chris] tested it on the same sacrificial plate he used to demonstrate the awesome power of Lil’ Screwy, his 100-ton homebrew press. He drilled a 3/8″ round pilot hole and then went to work with the Wobble Drive. The tool bit side proved to be too long to provide the requisite stroke, so he cut it down by about half. Once the tool has chewed through the steel, the tool bit decouples at the ball bearing and [Chris] has himself a square hole and that much more hacking cred.