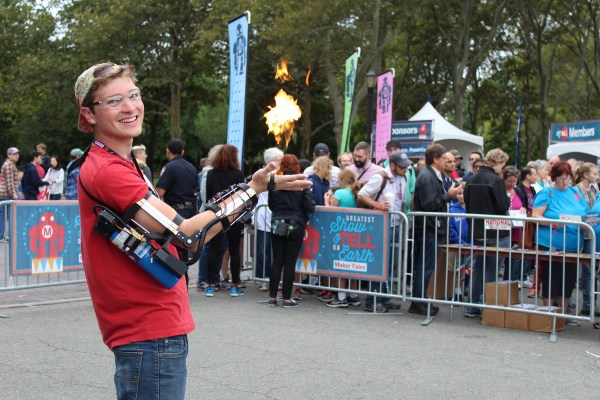 Part of what makes flamethrowers fun is their inherent danger. This is what makes a lot of things fun, though, from snowboarding to skydiving to motorcycle riding. As with all of these sensible hobbies, though, it’s important to take as much unnecessary risk out of the activity as possible to make sure you’re around as long as possible to enjoy your chosen activity. With that in mind, [Stephen] decided to make some improvements on his classic wrist-mounted flamethrower.

To start, he ditched the heavy lead-acid battery that powered the contraption in favor of a smaller 5 V battery. In fact, the entire build is much more compact and efficient. He was also able to use the same battery to run a tiny taser that acts as an ignition source for the flamethrower’s fuel. The fuel itself is butane, and the modified flamethrower is able to launch flames much further than the original due to improvements in the fuel delivery system. These improvements also include “Finding a way to prevent butane droplets from lighting and landing on [his] hand” which seems like a necessary feature as well.

The entire build now is very well refined and professional-looking, which is also a major improvement from the first version. It’s also worth watching the video after the break as well, which includes a minor run-in with the New York City fire marshal. And, it still retains some of the danger and all of the fun of the original builds which is something we always like to see.