This design revolves around an injection molded bottom part and a tinted acrylic top that would be laser cut. The two parts would be held together using large bolts on top of the acrylic top plate going into (or through) the bottom part. The large hardware could also protrude a little and might help in protecting the acrylic top part from scratches. [Louis] feels like the large hardware makes it look sturdy and secure. The acrylic top plate would allow users to see inside the device and would also protect the screen. Due to the acrylic on top of the screen we would have to rely on something other than the touchscreen for user input, in this case a rotary encoder. This design would mimic the feel of a safe. Using a metal extrusion as the body of the device would have been nice but would have required machining in order to fit the card slot and USB cable, leading to a higher case cost. And here is a 3D render: Similar design to his previous one, still using an injection molded base with a translucent top. Only this time, it’s a bit smaller overall but a bit larger to accommodate a capacitive sensor strip below the screen. There’s also a bit of a tilt angle on this one like a desktop keyboard making it easier to view the screen and interact with the device. As with the previous design, the USB cable and smart card would be inserted in the back. Here’s a bit of a weirder one. If the device is heavily reliant on a browser extension, it might be possible to operate it without the use of a screen on the device. In this case, the body would be injection molded plastic and the bottom would be translucent laser cut acrylic. This would allow you to faintly see inside the device to make sure nothing has been tampered with. It could also allow a bright RGB led to make the base of the device glow. [Louis] could imagine that the browser extension could make a request for a password then the base would light up red and you have 3 seconds to press the button to authenticate and it would fade out in green to let you know it worked. [Louis] is really not sure how feasible this would be but he is throwing it out there anyways…

The idea was that a hinged USB plug could also serve to secure this design to a bag or keychain. But [Joe] concedes this may be well out of budget. [Joe]’s impression was that we were struggling to implement the touch screen within budget, so buttons and/or capacitive sensors could be a cheaper alternative. Having buttons or capacitive sensing near the screen would allow the UI to display the function of the button at the edge of the screen. Hence the buttons could have different functions depending on context. Crucially, if the buttons are this large the user would be able to touch different parts of the capacitive strip to enter a code made up of numeric digits 0-9. If the capacitive touch sensors could form part of the PCB [Joe] thought this would be quite a cheap way to implement user input. As you may have guessed, this design would have capacitive touch slider on the top/bottom and capacitive buttons on the left/right. Several concerns were expressed that having a USB connector may not be safe for the device when plugged into a laptop.

This design is intended to be a touchscreen only device, but could be modified to capacitive input with sliders on either side (top/bottom) of the display. The thing that [Andy] likes about this design is the horizontal axis of symmetry. For a laptop user, the device could be used on either side with a short usb cable straight to the port. The display would be flipped in software. The two things [Josh] didn’t get a chance to sketch are: the USB port along one of the short sides, and the cap-touch regions. A pair of auxiliary PCBs could provide 4 cap-touch buttons along the left side of the screen, and a “slider” region along the right side. This is a touch-only design composed of two elements: one base and one credit card sized case. Magnets would be included within the base to keep the Mooltipass from moving. 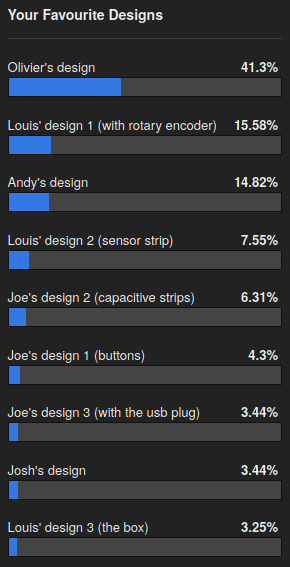 So what do our dear Hackaday readers think? Please vote for your favorites designs below! And if you subscribe to the Mooltipass Google Group, you may want to enable email notifications to stay updated… there’s a great discussion happening, in which we’re trying to settle on the license we should use for the final firmware.

34 thoughts on “Developed On Hackaday: The Designs”