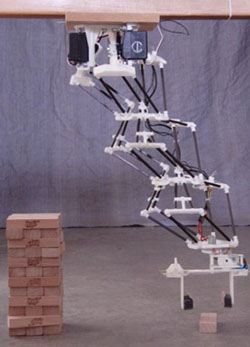 By now you’d think we’ve seen just about every means of robotic actuator possible. We have Cartesian bots, Stewart platforms, SCARA bots, Delta bots, and even some exceedingly bizarre linkages from [Nicholas Seward]. We’re not done with odd robotic arms, it seems, and now we have Delta-ish robots that can move outside their minimum enclosed volume. They’re fresh from the workshop of [Aad van der Geest], and he’s calling them double and triple Deltas.

Previous Delta robots have used three universal joints to move the end effector up and down, and side to side. They’re extremely fast and are a great design for 3D printers and pick and place machines, but they do have a limitation: the tip of a single Delta can not move much further than the base of the robot.

By adding more parallelograms to a Delta, [Aad] greatly increases working volume of a his robots. One of the suggested uses for this style of bot is for palletizers, demonstrated in the video below by stacking Jenga blocks. There is another very interesting application: legs. There’s footage of a small, simple triple Delta scooting around the floor, supported by wire training wheels below. It makes a good cat toy, but we’d love to see a bipedal robot with this style of legs.

17 thoughts on “The Triple Delta Robot Arm (and Leg)”