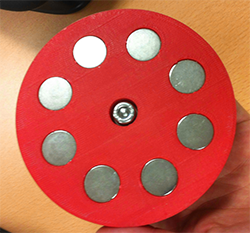 Three days ago on October 21, 2014 it was announced to the world the Back to the Future hoverboard was real. It’s a Kickstarter, of course, and it’s trending towards a $5 Million dollar payday for the creator.  Surprisingly for a project with this much marketing genius, it’s a real, existing device and there’s even a patent. From the patent, we’re able to glean a few details of how this hoverboard/magnetic levitation device works, and in our post on the initial coverage, we said we’d be giving away some goodies to the first person who can clone this magnetic levitation device and put it up on hackaday.io.

[jellmeister] just won the prize. It’s somewhat cheating, as he’s had his prototype hoverboard working in July, and demoed a more advanced ‘upside-down quadcopter’ device at the Brighton Mini Maker Faire in September. Good on ‘ya [jelly]. You’re getting a gift card for the hackaday store. 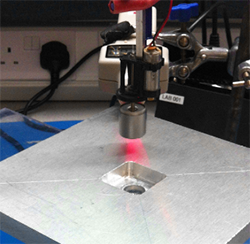 Like the Kickstarter hoverboard, [jelly] is using an array of magnets rotating in a frame above a non-ferrous metal. For the initial test, eight neodymium magnets were arranged in a frame, suspended over 3/4″ aluminum plate, and spun up with a drill. With just this simple test, [jelly] was able to achieve 2kg of lift at 1cm and 1kg of lift at 1 inch of separation. This test also provided some valuable insight on what the magnets do to the aluminum or copper; the 3kg aluminum plate was nearly spinning, meaning if this device were to be used on small plates, counter-rotating pairs of magnetic lifters would need to be used.

The test rig then advanced to two pairs of rotors with standard hobby brushless motors, but stability was a problem; the magnetic rotors provided enough lift, but it would quickly fall over. To solve this problem, [jellmeister] took a standard quadcopter configuration, replaced the props with magnetic rotors, and successfully hovered it above a sheet of aluminum at the Brighton Maker Faire.

Since [jellmeister] has actually built one of these magnetically levitating hoverboards, he has a lot more data about how they work than an embargoed press release. The magnetic rotor hoverboard will work on aluminum as well as copper, but [jell] suspects the Kickstarter hoverboard may be operating right at the edge of its performance, necessitating the more efficient copper half pipe. The thickness of the non-ferrous plate also makes a difference, with better performance found using thicker plates. No, you bojo, hoverboards don’t work on salt water, even if you have pow-ah.

So there ‘ya go. That’s how you build a freakin’ hoverboard. [jellmeister]’s design is a little crude and using a Halbach array for the magnetic rotors should improve efficiency. Using a 3D printed rotor design is a stroke of genius, and we’ll expect a few more quad-magnetic-levitating-things to hit the tip line in short order.

Demos of [jellmeister]’s work below.

Oh. These things need a name. I humbly submit the term ‘Bojo’ to refer to any device that levitates though rotating magnets and eddy currents.