[Gene] has a project that writes a lot of settings to a PIC microcontroller’s Flash memory. Flash has limited read/erase cycles, and although the obvious problem can be mitigated with error correction codes, it’s a good idea to figure out how Flash fails before picking a certain ECC. This now became a problem of banging on PICs until they puked, and mapping out the failure pattern of the Flash memory in these chips.

The chip on the chopping block for this experiment was a PIC32MX150, with 128K of NOR Flash and 3K of extra Flash for a bootloader. There’s hardware support for erasing all the Flash, erasing one page, programming one row, and programming one word. Because [Gene] expected one bit to work after it had failed and vice versa, the testing protocol used RAM buffers to compare the last state and new state for each bit tested in the Flash. 2K of RAM was tested at a time, with a total of 16K of Flash testable. The code basically cycles through a loop that erases all the pages (should set all bits to ‘1’), read the pages to check if all bits were ‘1’, writes ‘0’ to all pages, and reads pages to check if all bits were ‘0’. The output of the test was a 4.6 GB text file that looked something like this:

The hypothesis tested in this experiment was, “each bit is independently likely to fail, with exponential dependence on number of erase/write cycles”. There were a number of interesting observations that led [Gene] to reject this hypothesis: There were millions of instances where an erase did not reset a bit to ‘1’, but none where a write did not change a ‘1’ bit to ‘0’. That’s great for developing an error correction code scheme.

There was also a bias in which bits in a word produced errors – bits 31 and 32 were slightly more likely to have an error versus other bits in a word. The most inexplicable finding was a bias in the number of failures per row: 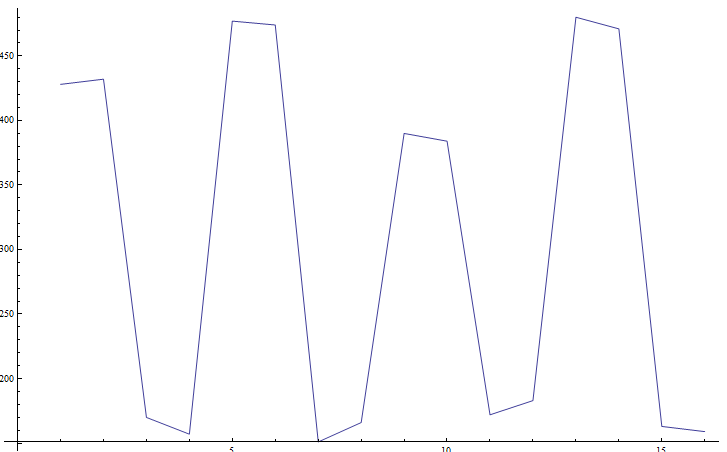 A row of Flash in a PIC is 128 bytes, and if all rows were equally likely to produce an error, the above graph would be a little more boring. It’s odd, [Gene] has no idea how to interpret that data, and only decapping one of these PIC and looking at it with a microscope will tell anyone why this is the case.

At the very least, Microchip is severely underrating the number of Flash read/erase cycles on this microcontroller; this chip was rated for 20,000 cycles, and the very first failed bit happened on cycle 229,038. With a separate run, the first failure was around cycle 400,000.