[Aidan] wanted a prosthetic that could use different attachments specific to what he wanted to do, taking inspiration from a Swiss army knife. He wanted to be able to play the Wii, assemble LEGO, eat food, and even play an instrument. His mom wanted the prosthetic to be able to “grow” with [Aidan]. A tall order? Perhaps, but [Coby] was up to the challenge. 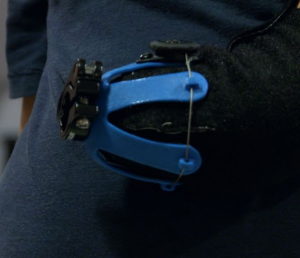 It’s rather ingenious actually. [Coby] designed a flower shaped piece of plastic that can be 3D printed and then thermoformed in warm water to form around the end of a limb.

To tighten it, he stole a ratcheting adjustment system from an adjustable knee strap, allowing for quick installation and removal — something [Aidan] can do himself.

This way as he continues to grow, the prosthetic remains adjustable, and worst case, just needs a new part 3D printed. To allow for the attachment of various tools, [Coby] added a quick release clamping system designed to hold anything with a 1/2″ diameter shaft making it super easy for [Aidan] and his mom to make their own attachments.

3D printing is doing some great things for prosthetics. Earlier this year we saw an Iron Man themed prosthetic hand to make kids dreams come true, a cute story about someone making an artistic prosthetic for a random stranger and the introduction of E-nable, a community dedicated to DIY prosthetics — to give the world a “Helping Hand”.