One of the interesting benefits of the 3D printing revolution is the dramatic increase in availability of prosthetics for people with virtually any need. With a little bit of research, a 3D printer, and some trial and error, virtually anyone can build a prototype prosthetic to fit them specifically rather than spend thousands of dollars for one from a medical professional. [Dominick Scalise] is attempting to flesh out this idea with a prosthetic hand that he hopes will be a useful prosthetic in itself, but also a platform for others to build on or take ideas from.

His hand is explained in great detail in a series of videos on YouTube. The idea that sets this prosthetic apart from others, however, is its impressive configurability while not relying on servos or other electronics to control the device. The wearer would use their other hand to set the dexterity hand up for whatever task they need to perform, and then perform that task. Its versatility is thanks to a unique style of locks and tensioners which allow the hand to be positioned in various ways, and then squeezed to operate the hand. It seems like a skilled user can configure the hand rapidly, although they must have a way to squeeze the hand to operate it, or someone will need to develop an interface of some sort for people without needing to squeeze it.

To that end, the files for making your own hand are available on Thingiverse. [Dominick] hopes that his project will spark some collaboration and development, using this hand as a basis for building other low-cost 3D printed prosthetics. There are many good ideas from this project that could translate well into other areas of prosthetics, and putting it all out there will hopefully spur more growth in this area. We’ve already seen similar-looking hands that have different methods of actuation, and both projects could benefit from sharing ideas with each other.

Thanks to [mmemetea] for the tip!

END_OF_DOCUMENT_TOKEN_TO_BE_REPLACED 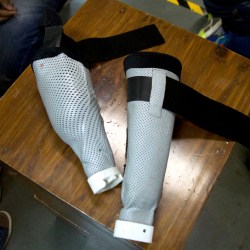 Innovation in prosthetics is open to anyone looking to enhance the quality of life, but there’s an aspect of it that is sometimes under-served. The DIY Prosthetic Socket entry to the Hackaday Prize is all about the foundation of a useful prosthesis: a custom, form-fitting, and effective socket with a useful interface for attaching other hardware. While [atharvshringaregt] is also involved with a project for a high-tech robotic hand with meaningful feedback, socket fitting and design is important enough to be its own project.

The goal is not just to explore creating these essential parts in a way that’s accessible and affordable to all, but to have them include a self-contained rechargeable power supply that can power attachments. Thoughtful strap placement and a power supply design that uses readily available components with a 3D printed battery housing makes this DIY prosthetic socket a useful piece of design that keeps in mind the importance of comfort and fitting when it comes to prosthetics; even the fanciest robot hand isn’t much good otherwise.

The best example of this is [Oscar Pistorius] — the man with fiberglass spring legs. He’s a double amputee who can run at an Olympic level — or maybe even faster. With the Cybathlon, his prosthesis would not only be accepted, but encouraged to help demonstrate and further the technology by adding a competitive angle to the companies manufacturing them.  END_OF_DOCUMENT_TOKEN_TO_BE_REPLACED

Humans may all have the same overall form, but when we need to find a suitable replacement for a missing limb, it’s clear that between the variety of finger-lengths and hand-breadths, a one-size-fits-all prosthetic just wont cut it. OpenBionics puts a spin on today’s approach to prosthetics, putting forth a framework of tools that’s flexible enough to fit the spectrum of hand shapes and enables us to create our own prosthetic at home that can meet the challenge of most everyday tasks.

Minas Liarokapis of the OpenBionics team gave a talk at this year’s Hackaday SuperConference which covered the design considerations and unique features of the project. This incredible work was recognized with 2nd Prize in the 2015 Hackaday Prize. Watch Minas’ talk below, then join us after the break as we cover more details that went into developing this prosthesis.

END_OF_DOCUMENT_TOKEN_TO_BE_REPLACED

The Internet overflows with prosthetics projects, and to a large extent this is somewhat understandable. Prosthetic devices are ultimately a custom made for each user, and 3D printers are trying to find a purpose. Put two and two together, and you’re going to get a few plastic limbs.

The electronics required for advanced prosthetics are a bit harder than a 3D scanner and a printer. If you’re designing a robotic leg, you will need to pump several hundred watts through an actuator to move a human forward. For the last few years, [Jean-François Duval] has been working on this problem at the MIT Media Lab Biomechatronics group and has come up with his entry for the Hackaday Prize. It’s a motor and motor control system for wearable robotics that addresses the problems no other project has thought of yet.

The goal of the FlexSEA isn’t to build prosthetics and wearable robotics – the goal is to build the electronics that drive these wearables. This means doing everything from driving motors, regulating power consumption, running control loops, and communicating with sensors. To accomplish this, [Jean-François] is using the BeagleBone Black, a Cypress PSoC, and an STM32F4, all very capable bits of hardware.

So far, [Jean-François] has documented the hardware and the software for the current controller, and has a few demo videos of his hardware in action. You can check that out below.

END_OF_DOCUMENT_TOKEN_TO_BE_REPLACED

One of the greatest uses we’ve seen for 3D printing is prosthetics; even today, a professionally made prosthetic would cost thousands and thousands of dollars. For his entry to the Hackaday Prize, [Martin] is building a low-cost 3D printed hand that works just like a natural hand, but with motors instead of muscles and tendons.

There are a lot of 3D printed finger mechanisms around that use string and wires to move a finger around. This has its advantages: it’s extremely similar to the arrangement of tendons in a normal hand, but [Martin] wanted to see if there was a better way. He’s using a four-bar linkage instead of strings, and is driving each finger with a threaded rod and servo motor. It’s relatively strong; just the motor and drive screw system was able to lift 1kg, and this mechanical arrangement has the added bonus of using the servo’s potentiometer to provide feedback of the position of the finger to the drive electronics.

This is far from the only prosthetic hand project in the running for The Hackaday Prize. [OpenBionics] is working on a very novel mechanism to emulate the function of the human hand in their project, and [Amadon Faul] is going all out and casting metacarpals and phalanges out of aluminum in his NeoLimb project. They’re all amazing projects, and they’re all making great use of 3D printing technology, and by no means are there too many prosthetic projects entered in The Hackaday Prize.

When [aimzzz] met this puppy born without arms, the need for some assistive hardware was obvious. We love it that rapid prototyping techniques have become so accessible that something like building a wheelchair for a puppy is not just affordable, but a lot of fun too!

The main part of the projects is a cradle which will be comfortable for the dog. 3D printing is a great choice here because it can be customized to suit the needs of a particular dog. We remember seeing another dog named Derby who has 3D printed legs that make room for the biological legs that aren’t functioning correctly. In the case of this wheelchair, the cradle could be altered make room for legs.

The rest of the build is purely mechanical. Aluminum tubing, tubing connectors, and wheels combine with the printed cradle (and some padding material) to make for one sweet ride. It takes a bit of training to get used to, but as you can see after the break this makes mobility quite easy and intuitive for the pup.