Hackathons to solve the world’s problems

Hackathons are now being run to solve many of the world’s problems. Recent examples include MIT Media Lab ‘make the breast pump not suck,’ and Yale’s ‘hacking heath’. Both of these hackathons were one-weekend sprints with the goal of developing rapid proof-of-concept prototype solutions.

In the case of Yale’s hackathon, the outcome was a 5 minute pitch for a new startup company. According to Hacking Health’s organizer, [Chris Loose], “the event generated extraordinary energy and a number of impressive product concepts. Many of the teams continue to drive their ideas ahead and are pursuing grant funding…”

Recently, [Tony Kim] ran MIT’s 6.002 Circuits and Electronics course as an EdX program in Mongolia. After learning the background theory students built many of the analog and digital circuits labs, created their own circuits and systems, and even built a coffee can radar which I’ve been told was on Mongolian National Television. One of the students from this effort became known as the Boy Genius of Ulan Bator.

Project based learning is making a come back. Whether it is requiring a final project or basing a course entirely around a project.

Senior design or capstone courses have carried the torch on project-based learning for decades, in this every EE student (or ME or physics, or etc) completes a working prototype by the end of the semester. These courses are typically the very last thing you would take in your undergraduate program.

Electromagnetics was made more interesting by the MIT Coffee can radar course that I created with my fellow MIT Lincoln Laboratory colleagues. This course continues to be extremely popular, with numerous spin-offs and professional education (open enrollment to anyone) variants also including build a phased array and a search and track radar. This course has been used at Northrup Grumman Inc., internal to MITRE corp, MIT Lincoln Labs, and many others. It has also been used as a capstone project at numerous EE programs across the world. UC Davis has created a full semester course based on this work. For those more interested in radar experimentation than building the radar itself, a fully assembled kit is now being offered. This was the top-ranked MIT Professional Education course in 2011, demonstrating the demand for project-based learning in electromagnetics and radar.

The ubiquitous coffee can radar is making the subject of Electromagnetics interesting to a new generation.

Recently, the final project has been to develop a full communications system, including a phased array transmitter and an envelope detector receiver, where the group achieving the greatest power transfer across the communications link wins. This project is broken up into four phases:

ECE405 is a project based antennas course, where a microwave communications link is constructed using a phased array of antennas.

According to [Prof. Prem Chahal], “the projects make the lecture material much more interesting and the students are able to realize the importance of the material being covered.” Project-based learning can be more work for the prof, but not in this case according to [Prof. Chahal], “the instructor time is recovered during lecture hours (because) the lecture material becomes much more interesting and simpler to explain, and students actively participate during the lecture hour.”

Student groups in ECE405 each build their own microwave communications link, where the link with the best power transfer wins.

Similarly, Harvard’s Introduction to Electrical Engineering ES 50 is providing an exciting experience for all involved where small groups of students make anything from a tri-corder to a Rubic’s cub solver as the final project.

This is just the beginning. In the near future I believe that final projects will be transforming what would otherwise be difficult or uninteresting courses.  Who else is challenging students with final projects? Tell us about your school’s program in the comments below.

The transition between undergrad and your professional career

For those of us who did not have the chance to build much hardware during the undergrad EE experience, [Chris Gammel] offers an alternative option in the form of the short-course, Contextual Electronics. It involves just about everything needed to take small integrated products from idea, through circuit design, to PCB. The basic idea behind Contextual Electronics is that anyone can design and build electronics systems as long as they have the resources to fill knowledge gaps between a typical heavy-in-theory undergraduate electrical engineering degree and what you will actually be doing in your career. According to [Chris]:

This idea came from my own struggles. I learned so much ‘on the job’, even after going through a 4 year college curriculum at a top school.

He goes on to point out that the biggest issue with undergraduate programs today,

is that they are designed for making everyone into professors, starting everyone from first principles and solely focusing on the rigor in the mathematical side of learning. This is a completely unrealistic way of preparing most engineers for their career.

Contextual Electronics fills the knowledge gab between your undergraduate EE degree and the real world.

With over 300 members and growing fast, Contextual Electronics is proving that there is a strong demand for practical engineering education.

Project based learning is your path to becoming involved in high value startup companies. In hardware-based startups you must develop proof-of-concept fast therefore having the ability to create, design, fabricate, then actually make work your idea is extremely valuable. Experience from project-based learning is the basis for this skill set.

An example is the incubator 4catalyzer founded by [Jonathan Rothberg]. Almost all startup companies coming out of 4catalyzer are hardware based. One of these, Butterfly Network Inc., is developing a new approach to ultrasound imaging and has raised $100M in funding.

We must act to make a change. Think of your most difficult and least-liked undergraduate course. How would you make it more interesting with a good project?

Align yourself with the closest or most applicable undergraduate course. Your activities should receive some degree of course credit for club members. For example, why not provide some extra credit for everyone who earns an amateur radio license and makes 20 QSO’s (two-way contacts), then reports on why and how the ionosphere enabled those QSO’s?

Lead the discussion. Come up with an idea, keep it in the back of your head, ready to pitch at the next alumni dinner, faculty event, or recruiting fair. Together we can hack away at education. 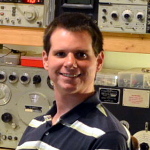 Gregory L. Charvat, is an advocate for project based learning, the author of Small and Short-Range Radar Systems, co-founder of Hyperfine Research Inc., Butterfly Network Inc. (both of which are 4combinator companies), visiting research scientist at Camera Culture Group Massachusetts Institute of Technology Media Lab, editor of the Gregory L. Charvat Series on Practical Approaches to Electrical Engineering, and guest commentator on CNN, CBS, Sky News, and others. He was a technical staff member at MIT Lincoln Laboratory where his work on through-wall radar won best paper at the 2010 MSS Tri-Services Radar Symposium and is an MIT Office of the Provost 2011 research highlight. He has taught short radar courses at MIT where his Build a Small Radar course was the top-ranked MIT professional education course in 2011 and has become widely adopted by other universities, laboratories, and private organizations. Starting at an Early Age, Greg developed numerous radar systems, rail SAR imaging sensors, phased array radar systems; holds several patents; and has developed many other sensors and radio and audio equipment. He has authored numerous publications and has received press for his work. Greg earned a Ph.D in electrical engineering in 2007, MSEE in 2003, and BSEE in 2002 from Michigan State University, and is a senior member of the IEEE where he served on the steering committee for the 2010, 2013, and 2016 IEEE International Symposium on Phased Array Systems and Technology and chaired the IEEE AP-S Boston Chapter from 2010-2011.