Sometimes there’s a lot of perks to working for a cutting edge tech company while also being a writer here at Hackaday. This week I had the opportunity to attend AMUG 2015 — the Additive Manufacturing User Group conference in Jacksonville, Florida.

I saw companies big and small, checked out the newest techniques like metal printing and mold making, and met a ton of interesting people. Join me after the break for the rundown and a video summary of my experience.

I attended the conference for my employer, Christie, as a Product Developer. I was there exploring new possibilities that the additive manufacturing (3D printing) realm is bringing to reality — especially with direct metal additive manufacturing technologies. The AMUG conference is fast becoming one of the most interactive and hands-on 3D printing conferences around. With over 70 vendors, sponsors and exhibitors there’s a little bit of everything.

Operating in its 27th year, the Additive Manufacturing User Group is a volunteer organization dedicated to bringing industry professionals, educators, and even students together who all share a passion for 3D printing. The group was originally limited to just stereolithography back in the 90’s — but as the industry continued to grow, they opened it up to all companies and technologies in the additive realm with the goals: encourage information exchange among all equipment owners and operators, propose solutions that involve basic modification to hardware or software, and provide a forum for technology exchange.

They’ve seen amazing growth, doubling in size in just the past few years — If you can convince your company to send you to this conference, I highly recommend it. It’s unlike any tradeshow / conference I’ve ever been to.

Joe Allison, CEO of Stratasys, explains the “cool shit” they get to do at work.

Stratasys was one of the biggest sponsors of this year’s event, with a huge booth showcasing their technologies with almost no emphasis on sales — just engineers showing off the machines, and some of the projects they’ve made. As much as our community seems to love bashing these big companies, they are driving this industry forward at such an accelerated rate. I have to give them kudos for their desire for innovation and advancement of AM.

I had the pleasure of hearing a keynote from the CEO himself, Mr. [Joe Allison] — who painted a most exciting picture of the future of AM. They also announced the creation of a new subsidiary of Stratasys — Stratasys Direct Manufacturing. It’s a one-stop-shop for almost every kind of manufacturing technology, additive and subtractive combined. I heard about some of their more exciting projects — like working with Legacy Effects and [Jason Lopes] on the 3D printed Iron Man suits used in all of Marvel’s movies. Any CEO who refers to their business ventures and activities, multiple times, as doing “cool shit” is awesome in my book. I included a few excerpts from his speech in the video embedded below.

Beyond the big companies at the expo, we also got to see some of the little guys. Even Formlabs had a booth — which probably had the most affordable machine at the event coming in at about $3000 — unlike the $300,000 norm.

I got to see the 3D printed speaker in person! If you don’t remember, I actually featured this project on Hackaday a few months ago. They had an excellent booth setup showcasing the Form 1+ and their wide range of materials. It was great seeing the big companies come by and gawk at the price-tag. After all, you could buy dozens of the Form 1+ stereolithography based machines compared to just one of most equivalent “industry” machines. And the quality was there.

Another of the “little guys” at the tradeshow was 3DP Unlimited, a massive 3D printer that utilizes a lot of the opensource software and technology that RepRaps use — it even features Marlin firmware. It’s a bit more expensive, coming in at about $20,000 — but seemed to be a very capable machine. Still too expensive for most hackerspaces, it’s a far cry from the equivalent industry FDM’s which go for hundreds of thousands.

I spent quite a bit of time at their booth watching the machine run and asking questions. My most obvious question was — how do you get the prints to stick? No build chamber, a massive bed, there has got to be curling issues! But there weren’t. First off — they don’t print in ABS, which typically has some of the worst problems with adhering to the bed, curling, and in general, failing prints. They prefer PLA and some of the other engineered plastics designed for 3D printing, like Taulman’s nylon and even materials like PETG. The second secret is beer.

Not to drink — but to use instead of hairspray on the borosilicate glass bed. I was just as surprised as you are now. For some reason that combination of low content alcohol and maybe some of the starch, creates a perfect slightly sticky surface for plastic to stick to. They swear by it. We did a quick google search and haven’t found any info about it — so we might prepare a quick tutorial later on this month explaining just how to do it. And of course to make sure they weren’t just pulling our leg.

In addition to that, there were of course the big players — and some new players altogether. HP is releasing their own 3D printer sometime next year… they brought some samples but not much more info than that!

By far the most popular tech been shown off are the new machines capable of manufacturing metal parts. The level of detail and accuracy is absolutely amazing. Just take a look at this titanium sample part that print3d4u.com was handing out.

It’s printed using the laser sintering process, and no post processing. That’s right — it’s a one piece assembly that has moving parts, right off the print bed! How freaking cool is that?

Now this second example is really cool. It’s a 3D printed part via SLA, which is then coated with a 0.0025″ layer of copper. Then electroplated with 0.006″ of nickel. You can bend the original part, but the metal plated one is stiff as a folded metal bracket. It was done by Repliform, and their booth completely surprised me. 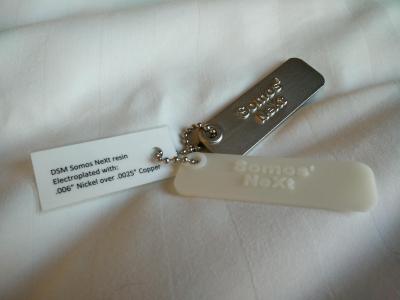 By being able to coat 3D printed parts with a layer of metal (they can go pretty thick too!) you open up a world of possibilities. A great example they had was a 3D printed impeller blade for a small boat. A functional part that can take large amounts of forces — without degrading. Now the question is — how can we do it at home? I’ll be looking into it for you guys as soon as I get back to my workshop.

This wasn’t the only fabrication technique that caught my eye. The industry has been working on tangentially related techniques for some time now, like combining 3D printing with mold making.

A 1-piece silicone mold of a quarter

Yazaki has become an expert in 3D printing master parts, and then casting them in silicone with Nylon to produce parts that are representative of production grade material properties. Just take a look at the example above. Pretty complex features in a part for a soft silicone mold. I was quite impressed, along with pretty much everyone else who attended the presentation.

There were also hands-on workshops (more info in the video), and I had the opportunity to try my hand at silicone molding! We’ve of course covered silicone molding many times before on Hackaday — but it was cool being taught by a company which leads the field.

One of the interesting things at the Stratasys booth were 3D printed molds for plastic injection molding machines. I actually got to see this in person two years ago, at the K-Show in Dusseldorf — which kick-started my Hackerspacing in Europe tour! It seems like they’ve made a lot of progress since then, and it is an exciting partnership of this rapid prototyping technology with mass production capabilities.

A 3D printed hockey arena served as our booth’s exhibit

Now I wouldn’t be a very good employee if I didn’t take an opportunity to show you guys some of the “cool shit” we do here at Hyphen Services which is the in-house full-service 3D printing part of the company I work for. Staying true to our Canadian roots, we brought some entirely 3D printed hockey helmets that we made as a proof of concept and capabilities here at Hyphen. Picking them up, you would have no idea they aren’t regular store bought helmets. In addition to our manufacturing capabilities, we also have a wide-range of engineering test equipment — from vibration tables to tensile testers, thermal chambers to anechoic chambers as well as an EMC chamber, and even some impact test equipment.

And of course, our booth looked like a mini hockey arena, also made mostly by 3D printing. Attendees of the conference could take shots on our goalie to win a Hyphen branded mini-stick (hockey stick).

Free Samples and the Social Aspects of the Con

What’s a trade show without free samples? The little catapults (top left) from Stratasys are great fun. Top right is folding assembly — much like those origami notes. Then we’ve got our 3D printed bearing, a wrench, a nylon cast beer bottle opener, and an example of metal plating SLA parts which I discussed earlier.

Q&A with Chuck Hull, Inventor of 3D printing — the part on the screen was one of the first SLA parts ever printed

Chuck Hull, the Inventor of Stereolithography and James Hobson, a Hackaday writer

I also got to hear an intimate Q&A interview session on stage with Chuck Hull — the father of 3D printing. He’s the inventor of stereolithography and the .STL file format. He founded 3D Systems and still helps run the company as the CTO. One of my peers actually sat with him the night before and asked “so how long have you been in the industry” to which he replied “a long time”. Class act Mr. Hull. Naturally, I had to get a photograph with him. He is in the Inventor’s Hall of Fame after all — along with the other greats like Nikola Tesla, or Henry Ford himself.

But this wasn’t just about meeting 3D Printing celebrities. It was great to talk with everyone I met at the conference. Every time we had a lunch or meal, we’d draw numbers from a hat to determine what table we sat at — to encourage mingling with people we might not meet normally!

This just barely scratched the surface of some of the cool technology I saw at AMUG 2015. I’d highly recommend attending next year if you can. In the mean time, there’s some more cool stuff in a short video montage I took during my stay in Jacksonville. Enjoy!