END_OF_DOCUMENT_TOKEN_TO_BE_REPLACED

It’s been fifty years since man first landed on the Moon, but despite all the incredible advancements in technology since Armstrong made that iconic first small step, we’ve yet to reach any farther into deep space than we did during the Apollo program. The giant leap that many assumed would naturally follow the Moon landing, such as a manned flyby of Venus, never came. We’ve been stuck in low Earth orbit (LEO) ever since, with a return to deep space perpetually promised to be just a few years away.

But why? The short answer is, of course, that space travel is monstrously expensive. It’s also dangerous and complex, but those issues pale in comparison to the mind-boggling bill that would be incurred by any nation that dares to send humans more than a few hundred kilometers above the surface of the Earth. If we’re going to have any chance of getting off this rock, the cost of putting a kilogram into orbit needs to get dramatically cheaper.

Luckily, we’re finally starting to see some positive development on that front. Commercial launch providers are currently slashing the cost of putting a payload into space. In its heyday, the Space Shuttle could carry 27,500 kg (60,600 lb) to LEO, at a cost of approximately $500 million per launch. Today, SpaceX’s Falcon Heavy can put 63,800 kg (140,700 lb) into the same orbit for less than $100 million. It’s still not pocket change, but you wouldn’t be completely out of line to call it revolutionary, either.

Unfortunately there’s a catch. The rockets being produced by SpaceX and other commercial companies are relatively small. The Falcon Heavy might be able to lift more than twice the mass as the Space Shuttle, but it has considerably less internal volume. That wouldn’t be a problem if we were trying to hurl lead blocks into space, but any spacecraft designed for human occupants will by necessity be fairly large and contain a considerable amount of empty space. As an example, the largest module of the International Space Station would be too long to physically fit inside the Falcon Heavy fairing, and yet it had a mass of only 15,900 kg (35,100 lb) at liftoff.

To maximize the capabilities of volume constrained boosters, there needs to be a paradigm shift in how we approach the design and construction of crewed spacecraft. Especially ones intended for long-duration missions. As it so happens, exciting research is being conducted to do exactly that. Rather than sending an assembled spacecraft into orbit, the hope is that we can eventually just send the raw materials and print it in space.

END_OF_DOCUMENT_TOKEN_TO_BE_REPLACED

[LudwigLabs] is creating PCBs using copper foil and a cutting plotter (vinyl cutter). In this approach, it’s an additive process where instead of removing copper from a copper-clad board, the traces are cut out of copper foil and transferred to a solid backing surface (cardboard, fiberglass, etc.). 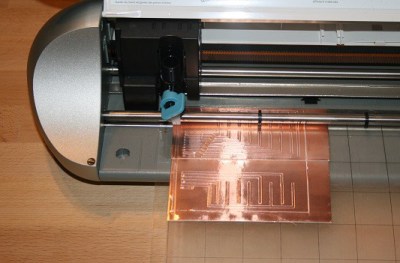 While similar to the use of copper tape laid out by hand, as covered by us last year, the big advantage of using a cutting plotter is that it allows one to create much more complicated traces similar to those you would expect to see on a factory-made PCB. Since cutting plotters translate a 2D design into very precise movements of the cutting blade, this allows for sharp angles and significantly thinner traces, allows designs from EDA software like KiCad or Altium to be quickly translated to physical boards.

Enterprising hackers might consider the possibility of using this approach to make two-sided, and even multi-layered boards. The copper is produced separately from the substrate which opens up the potential for using uncommon materials like glass or paper to host the circuits. The main limitations are the transferring of (very delicate) copper structures and creating vias without damaging the traces.

As a comparison with traditional PCB fab processes, the photo exposure and etching (or laser exposure and etching) process requires the creation of masks, UV exposing a board, etching, cleaning and so on. The simplicity of copper foil traces has led to many experimenting with this approach. Would you want to use this additive process, or are there refinements or alterations you would make?

Sometimes there’s a lot of perks to working for a cutting edge tech company while also being a writer here at Hackaday. This week I had the opportunity to attend AMUG 2015 — the Additive Manufacturing User Group conference in Jacksonville, Florida.

I saw companies big and small, checked out the newest techniques like metal printing and mold making, and met a ton of interesting people. Join me after the break for the rundown and a video summary of my experience.