Right now we’re throwing a two-day hackathon in Pasadena. As with all hackathons, people are going to build something, but that’s only going to happen today. Yesterday was an incredible Zero to Product talk that goes over PCB layout techniques, manufacturing, and schematic capture. In a seven hour talk, our own [Matt Berggren] took the audience through building a product, in this case a little ESP8266 breakout board. We livestreamed this; the video (and electric pickles) are below.

At the end of the talks, everyone with a laptop and a copy of Eagle had a PCB design that might work on their screen. [Matt] taught EagleCAD to about 100 people. That’s truly remarkable, and not just because Eagle is only slightly terrible.

The first seven hours of yesterday were filled up with talks, but there was a party afterwards, with people bringing hacks, builds, gigantic Miller welders, but not the right cord to plug the Miller into a 30A 220V circuit. 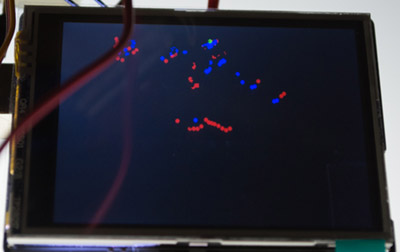 [Steve Collins] is a regular around the Hackaday Design Lab. Last year for our 10th anniversary extravaganza, he gave a talk about hacking his way to NASA. He’s back at the space this weekend with a really great project: he built a LIDAR.

This distance-mapping bot uses a LIDAR Lite from Sparkfun that was previously a crowdfunding campaign. This sensor uses an IR laser and a ‘pulsed light signature’ to determine the distance to an object. [Steve] has the sensor rotating on a servo, feeding onto an Arduino, and displaying something like the ‘moving object prop’ from Alien on a TFT display. It can detect objects in a room and supposedly up to 40 meters.

The guys from Deezmaker brought a few of their 3D printers and a 3D scanning rig. It’s just a turntable, a Kinect, and a bit of linear rail, but they were able to scan a half dozen or so people and print out miniature copies.

Pickles have a lot of salt in them. Put two electrodes in a pickle, run a kilowatt through them, and you get a spectacular show, possibly a tan as well. Some of the crew from the 23b hackerspace loaded a gigantic Miller into a Jeep and drove it out to the event. The Hackaday Design Lab apparently has a few 30A 220V circuits, and 23b had a long enough extension cord:

That was the highlight of the night right there, and we didn’t burn down the space. Awesome.

We’re going to be at the space again all day today with boxes and boxes of dev boards, components, soldering irons, and some awesome LeCroy scopes. If you’re in LA, come on out.

7 thoughts on “How To Make Hardware, With Examples And An Electric Pickle”