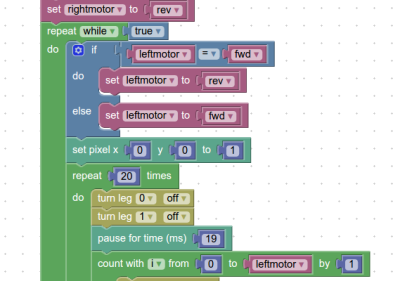 One interesting feature is the web site development environment. In addition to offering a repository for sharing and forking projects, it also allows live emulation of a program so you can see what your code will do on a little graphic of a CodeBug right on the web page. Another thing we liked was the ability to view your code in blocks (like the picture to the right) or as traditional code.

Servo robots aren’t anything new (even ones that use a single servo and robotic snakes). However, this is a good alternative to a “hello world” program for these tiny and inexpensive boards.