Some things just go hand in hand. Hacking and guitars are one perfect example. A huge number of hackers, makers, and engineers have at least dabbled in playing the guitar. Even those who don’t play have heard the swan song of the wayward guitarist “Bro, you fix amps?”. Seriously, once your guitar toting friends find out you tinker in electronics, you’ll never be left wanting for pizza or beer. This week’s Hacklet is about some of the best guitar projects on Hackaday.io! 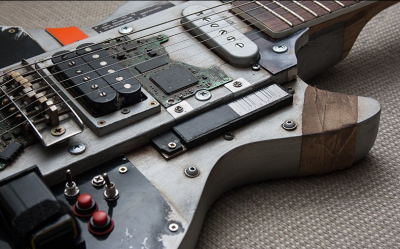 We start with [FiveseveN] and Cyberpaul, his custom guitar. Cyberpaul started as a communist bloc era Les Paul style guitar. Not a real Les Paul of course, this was one of the many knockoffs which have been manufactured over the years. This guitar was in sad shape originally, but [FiveseveN] stripped it down, refretted it, and re-built the guitar into something completely new. Cyberpaul’s finish might be best called technopunk, with a silver paint job and bits of equipment everywhere. A refinish job like this could go horribly wrong, as we’ve seen with a few steampunk builds. [FiveseveN] made it work though. 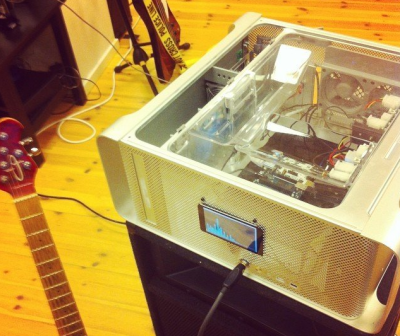 Next up is [Elias Bakken] and Amplificent. [Elias] built a guitar amp out of one of those beautiful aluminum Macintosh G5 cases. The main amplifiers are two 45 watt class B amp blocks. He didn’t stop with just amps though. [Elias] added an Arduino Tre running Linux. The Tre in its most basic mode can run an audio spectrum analyzer. The spectra are displayed on a 4.3″ LCD mounted to the front of the amp. [Elias] also plans to add Pedalboard.js to give himself a real-time effects library. The Jack audio framework for Linux should allow for a low latency effects processor – essentially an entire pedal board in a box. The final amp looks great, and with those old school power boards, we’re sure it sounds great as well. 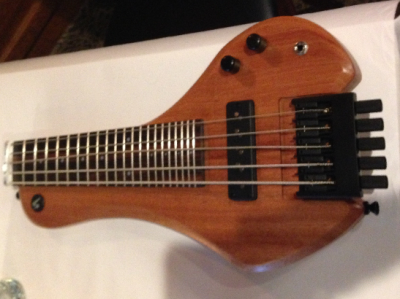 [Andybrownri] needed a bass for the road. He went into his workshop and the result was The Wing. In [Andy’s] own words, the Wing is “exactly one half of a 33″ scale bass guitar”. At only 20″ long, the Wing is more body than neck. Playing it feels much like playing a regular bass above the 12th fret. A pitch shifting circuit drops the frequencies down an octave. [Andy] is already on his second prototype of The Wing, and the results look incredible. The rosewood fingerboard really looks great against the mahogany body. [Andy] is already planning upgrades like a MIDI pickup and a built-in headphone amplifier for playing in hotel rooms. 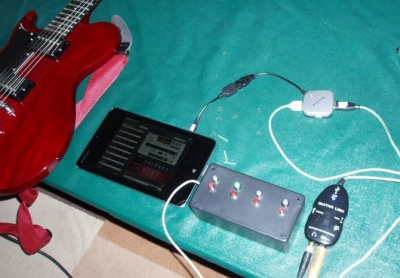 Finally, we’ve got [Matthew Kirk] with Guitar Rig 5 DIY Foot Pedal Controller. [Matthew’s] dad recently picked up the electric guitar. If you haven’t played in the last decade or so, you’re really missing out. Software like Guitar Rig has replaced racks of effects equipment or boards filled with pedals. The only hard part is controlling the software. On a PC, it’s an easy point and click interface. On a tablet though, touch screens make things a bit more difficult. Thank goodness for keyboard shortcuts! [Matthew] used an Arduino micro to create an HID keyboard interface. 4 buttons allow [Matthew’s] dad to stop out any one of 12 presets. The LEDs display the current patch.

If you want to see more guitars, amps, pedals, and effects processors, check out our new guitar projects list! Did I miss your project? Don’t be shy, just drop me a message on Hackaday.io. That’s it for this week’s Hacklet, As always, see you next week. Same hack time, same hack channel, bringing you the best of Hackaday.io!

One thought on “Hacklet 75 – Guitar Projects”