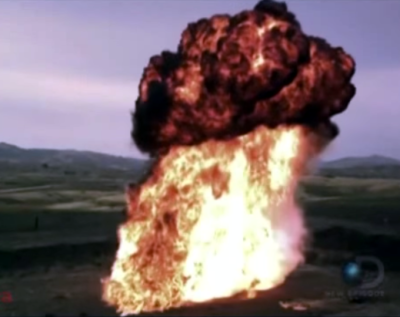 The discussion starts off with a recollection of the MythBusters experiment that made Grant fear for his life. They first prototyped a non-dairy creamer powered fireball on a small scale using an air-cannon and a road flare. The flare won’t ignite the creamer when it is at rest. But when launched into the air it disperses, crosses the Stoichiometric Ratio, and ignites. The successful test led to ordering a pallet of the creamer and creating a huge fireball on the bomb range.

In the first five years of the show the hosts were responsible for taking out the trash — it was in the contract. Not a big deal, we take out our own trash as well, but it drives home the point that they weren’t merely on-screen personalities. In fact, each 22-minute episode was put together on an extremely tight schedule. Grant recalls the entire process involved just 10-days per episode. This included coming up with the ideas for the experiments, prototyping, executing, and filming them.

To make this possible it was necessary to have a very quick process of gaining proficiency at new skills. Grant also never threw anything away. One example of this is a sword-wielding robot which was used to test the ability of one samurai sword to slice through another. The apparatus needed to swing the sword very quickly. When they were done with this episode the device went on the shelf until they needed to swing a sledgehammer. From there it was a quick hack to change the axis on which the implement rotated. This reuse saved a ton of time.

In his own shop Grant is working on a new build. He plans to fabricate his own BB-8 replica. This will be done completely from scratch and will include all of the features seen in the new movie.

When speaking on this topic in the video above, he mentions a few very interesting things about Star Wars robot appearances. When he worked for Industrial Light and Magic he sometimes played C3PO at events. This was because the company wanted to make sure the appearances put the best example forward for their brand. But lately, they have sometimes hired fans to work events. This is because the replica builds have become so pristine over the years that they are every bit as awesome as what the company produces.

It was great having Grant Imahara at the 2015 Hackaday SuperConference. If you didn’t get a chance to meet him there, you can connect with him on Twitter: @GrantImahara.

10 thoughts on “A Fireside Chat With Grant Imahara”