With the release of the Raspberry Pi Zero last month, we’ve been waiting in excitement to see the first creative hacks to come out, making use of its tiny size; which if you didn’t know, is smaller than a business card. [Terence Eden] hopped to it and made what might be the first Raspberry Pi Zero emulator: inside an Xbox controller. 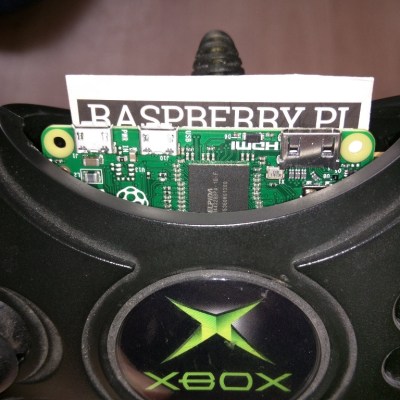 Now it does stick out a bit as you can see in the pictures, but we’re sure it won’t take someone long to make a 3D printed part that snaps into the controller giving it a more stock appearance. Unfortunately since HDMI can’t carry a power source to the Pi, [Terence] is using a micro-USB to power it — but there is enough space inside the controller for a battery pack if you wanted to make it truly portable.

On the software side, he’s using a pre-built image of RetroPie which means you pretty much just need to load it and go. Is it just us or is the Raspberry Pi foundation working? Super accessible and easy to use computing for all!

PS: In case you’ve been living under a rock and still don’t know what the Pi Zero is, you can check out our original coverage of the device here, and a more thorough history and explanation of it here.