However, [Morgan’s] best-remembered books were from the 1950’s and 1960’s. The first one was titled “The Boys’ First Book of Radio and Electronics.” You can guess the successive titles (just replace the word “First”).

The first book covered some basics about how [Hertz] performed experiments and theory but aimed at young people. [Morgan] was adept at making the topics accessible. He’d studied at MIT, so he knew the complexities of the subject, but he also knew his audience. The books talked about subjects of interest at the time like how “underwater sounds” (SONAR) helped to win World War II.  Chapter 5 and beyond of the book, however, was the part that got dog-eared from constant examination. Here’s the start of Chapter 5:

For less than one dollar you can buy a marvelous scientific device–namely a “tube” for a radio receiver. This inexpensive creation of scientific research does its work with a precision and a certainty that are astonishing.

If you were a kid who’d stared into the holes at the back of your family TV and saw those glowing thing inside, this chapter was a revelation. Chapter 6 was even more practical. It covered schematic symbols and the resistor color code. That chapter laid the groundwork for what every reader wanted: construction plans! Chapter 7 showed how to make a detector (basically a diode) out of some scrap material and iron pyrite, galena or silicon (see right). After that, it is a short trip to radio receivers that became progressively more complex.

The projects were well described, with detailed plans and notes and–most importantly–used parts you could obtain. The book didn’t have just radio projects. Chapter 10 contains an audio frequency amplifier (so you could put your radio’s signals out on a speaker). There’s also chapters on antennas and Morse code. The section on soldering is informative, but I’d hate to handle SMD with [Morgan’s] choice of irons (see left). 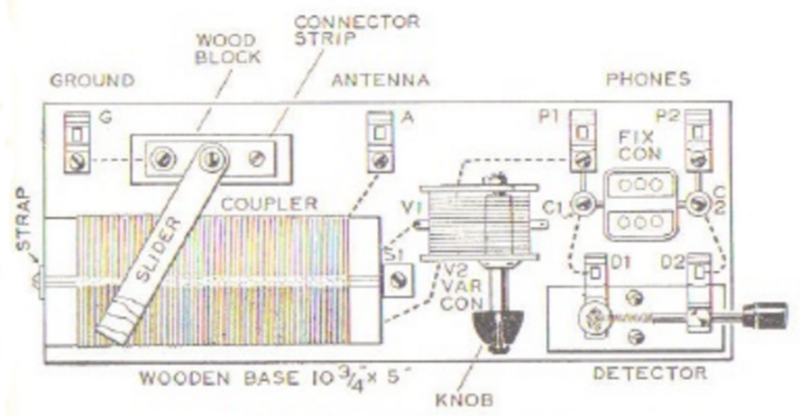 Building things in those days was a lot more artistic than most projects are today. Look at that crystal radio layout above, the picture of [SkyKing’s] radio above that, or you can see a few [Morgan] builds in [kc9kep’s] video, below. You constructed projects on wood or a steel chassis. You did wiring by hand. You could not get amplifiers, product detectors, and mixers as functional blocks in an IC containing 100s of transistors. But don’t get me wrong. I’m not trying to romanticize the era. I like building complex things out of ICs on PCBs and making things that would have amazed [Morgan] and his contemporaries. Imagine meeting Morgan in 1950 and telling him that your latest project had thousands of transistors (most of them, of course, bundled in an Arduino; even an old RCA 1802 had 5,000 transistors inside).

What I do wonder, though, is how does a budding electronic experimenter get this kind of start today? Sure, it is easier than ever to slap together some very complicated projects. But where are the simple projects you could slap together from stuff you found in the garage? (Well, ok, you don’t want to use my garage for that example, but you know what I mean.) Even an LED blinker today is likely to have a microcontroller in it. That’s a good thing, too, but maybe you’d learn more by building a relaxation oscillator. Sure, we’d never do that in a real project. But there’s some merit to having starter projects to–well–get started.

So here’s the challenge: What’s your ideal beginner’s project? That is if a middle school kid came to you and said “Where do I start?” what project would you have her do and why? Hackaday is, of course, an excellent resource even if many of the projects are not suitable for a beginner. There are a few, though, that come to mind. What other sites or books would you send our hypothetical student? Perhaps a bigger challenge is what project will you create for that target audience (and, maybe, post them on Hackaday.io)?