It is hard to be remembered in the electronics business. Edison gets a lot of credit, as does Westinghouse and Tesla. In the radio era, many people know Marconi and de Forest (although fewer remember them every year), but less know about Armstrong or Maxwell. In the solid-state age, we tend to remember people like Shockley (even though there were others) and maybe Esaki.

If you knew most or all of those names without looking them up, you are up on your electronics history. But do you know the name Rufus Turner?

Turner was born on Christmas Day, 1907 in Houston, Texas. At the age of 15, he became fascinated by crystal diodes and published his first article about radio when he was 17. Rufus Turner was–among other things–the first black licensed radio operator (W3LF). He was building and operating radios in Washington D.C., where he was attending Armstrong Tech.

Turner became a licensed professional engineer in California and Massachusetts. You may have even used something that Turner worked on. In the 1940’s, working with Sylvania, he helped to develop the 1N34A germanium diode (you can still buy these if you look around for them). 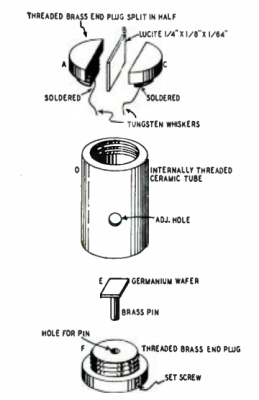 In 1947, industry created germanium transistors, and Turner was among the first to work with them. In 1949–predating commercial availability–Turner published an article “Build a Transistor” in Radio Electronics magazine–the first time most electronic hobbyists had any exposure to this kind of device; you can read the article on page 38 of this PDF reprint. That’s not a typo, by the way. Turner showed how to make a transistor in meticulous detail using germanium, ceramic, brass, and Lucite (see picture to the right).

By 1950, you could buy transistors off the shelf and Radio and Television News published Turner’s “A Crystal Radio Receiver with Transistor Amplifier” (see page 38). This was a three-transistor radio four years before the Regency TR-1 was on the market.

You can see a schematic of Turner’s radio below. The germanium transistors were sometimes refered to as “crystal triodes” and had very poor performance compared to what you’d expect from a transistor today.

The article that describes this circuit is one of the few on practical applications listed in Shockley’s book “Electrons and Holes in Semiconductors.”

Turner wrote articles for many years covering hobby and professional topics. He also wrote about technical
writing, math, and other subjects that interested him. In 1958, he earned a BA from California State College and then received an MA in English from USC. By 1960, he was working as an English professor, and became a Ph.D. in 1966. Although he was teaching English, he continued to turn out electronic publications including “ABC’s of Zener Diodes” in 1974 and “ABC’s of Integrated Circuits” in 1977.

Rufus Turner died in 1982, the same year that his “The Illustrated Dictionary of Electronics” went to print. February is black history month in the United States, and I thought it was a good time to remember this prolific author, teacher, and solid state pioneer.

44 thoughts on “Do You Know Rufus Turner?”