Conveniently, NTSC is also particularly easy to broadcast. It’s just AM modulation. For Channel 3, it’s center frequency is 61.25MHz, and TVs really only care about the upper sideband. In order to encode it, simply make sync the most powerful part of the signal and white the weakest. Black is somewhere in the middle. Why white weak and sync and black strong? It’s so that the TV can most accurately know where the black and sync levels are. Without a frame of reference, the receiver can’t know if your signal is relatively strong or weak.

Why broadcast? Many projects use a composite signal and plug directly into the TV. It had more to do with the challenge. Though I was aware it was possible to broadcast NTSC with an ATTiny85, that was using a PLL, and some other specialized hardware. I didn’t even know if it was possible to do on an ESP8266.

In the Beginning, there was the Black Screen

I started playing with some 32-bit repeating patterns and all of a sudden my TV turned dark. This meant the TV was getting a signal, not that it found anything in the signal but that it was successfully demodulating something. I didn’t really know what qualities made the bit pattern 0x98c63333 (msb first) be so strongly received by my little TV at the time but it was of little concern. This would be my “sync” since it was the strongest. To make black, I’d have to weaken the signal a little, after some experimentation, I came to 0x88862210 – then white at 0xffffffff (something that turned into a DC signal and was not received by my TV set). I attached a short wire to the ESP’s ‘RX’ pin, another to the I2S Data Out pin, and the ESP started broadcasting. From here I could get better resolution by making a black-then-white “pixel” and a white-then-black “pixel”. This was the basis of my first experiment where the ESP8266 broadcast on Channel 3!

So, that wasn’t that hard and was mostly done mostly by throwing lines of code at a wall and seeing what stuck. I didn’t know why this worked, since I wasn’t transmitting at 61.25 MHz. I thought it was an overtone. Maybe a 3rd or 4th harmonic? I initially did test this theory by dropping my data (doubling the samples) into an Online FFT Calculator. This quickly disproved theory about harmonics, but I noticed something even crazier. The signal was actually mirrored around 1/2 the sample rate. It wasn’t 30.625 * 2 or anything… It was 17.5 MHz folded around the 40 MHz nyquist. Let’s look at this in frequency space.

The main frequency that was being transmitted was 17.5 MHz, then 3db down (1/2 the power) you can see a reflection at 62.5 MHz. You can also see many other peaks at frequencies to the left of 40 MHz, each having a reflection on the right side of 40 MHz, just at half the power. RF is weird.

Armed with this knowledge, I realized I could directly synthesize the carrier but that I would need a longer period to make it accurate. I was able to write up a little program to generate bit patterns of length 1408 bits (56.8us). Why 1408 bits?

Oh, right! You may not know why 3.58 MHz is important. Well, NTSC can also display color. It does this by generating a 3.58 MHz on both the transmitter and receiver and syncing it during the sync portion of the image, during a “colorburst.” Now, the signal strength controls brightness, strength of this new chroma carrier controls the saturation of the color and phase controls hue. TVs care a lot that this chroma signal is kept in sync, so I needed to be as precise as I could.

Thanks to algebra, we can directly synthesize both the main signal (61.25 MHz) and the chroma signal (64.83 MHz) at varying intensities and phases. The program created a table with several “colors” or repeating 1408 bit samples of “sync” “black” white” “red”, etc. Now, at any point in time we can select a specific color out of this table to be transmitted. Voilà. Now, the ESP can control the signal output.

Using a Browser To Get Everything Working

Using the interrupt on the I2S meant we can just plan out the video line we want to transmit and hand it over to the DMA engine to get it transmitted in sync. 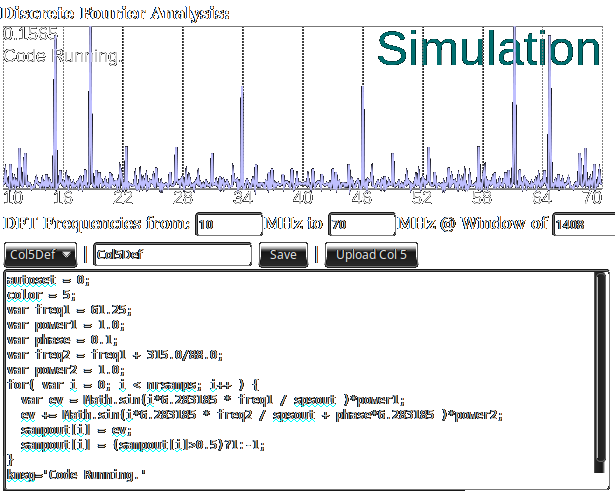 Writing a program to generate these bit patterns then recompiling and re-flashing the ESP took far too long for normal development (Maybe 30 seconds between each test). Instead, since the ESP has a web interface, why not leverage it? By writing a Web Worker, I could write code in the browser which is shown above. With every keystroke it would execute my updated code, creating new bit patterns, run DFTs against them and automatically update the table on the ESP which would start using them to transmit immediately. Milliseconds between development cycles.

What’s up with the funny patterns?

One thing you may notice when having large splotches of colors is that they aren’t really flat and pretty, but rather grainy. This all boils down to the mechanism of our signal generation being so terrible. NTSC Broadcast is analog, not 1 bit changing at break-neck speed. 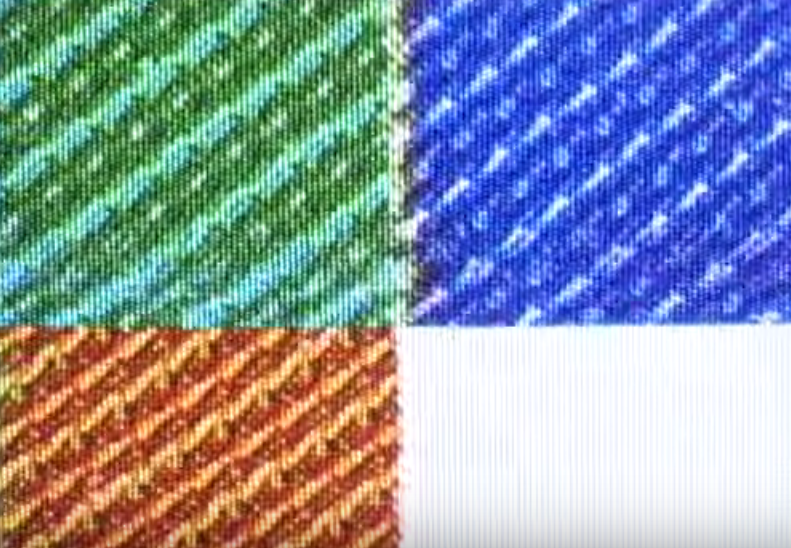 Instead of the television taking a snapshot of 1408 bits and computing averages over that, it’s taking small snapshots and processing the video on them, otherwise our pixels would be a quarter the screen’s width. Because the TV is only looking at a small window (approximately 1us) and the process of outputting 1 bit for our video is inherently random, the signal is rough. When we sample only 60 samples instead of 1408 in the DFT, we begin to see what the TV really sees and just how awful the signal is. The peaks shift around and change in amplitude, resulting in the artifacts the picture above shows.

Where to from here?

There is some overhead associated with the process of using this table and outputting a framebuffer. The table is only 3kB but the framebuffer is 12kB, a sizable chunk of the ESP’s memory. On the CPU end, I found that it took approximately 10% of the CPU to update the DMA and output the framebuffer. This allows for a great deal of time for drawing the frame itself. Systems could be implemented that calculate the frame on the fly, only store a text buffer, etc. This opens the door for a great deal of performance that could be used for everything from an information text display to drawing sophisticated 3D environments.

NTSC is probably my favorite standard. Its surprising robustness, ubiquity, and simplicity provides the ability to output, transfer and view video in so many ways it hardly matters that the standard is “dead.” Whether a composite plug or broadcast over channel 3, it provides a mechanism for video output to processors large and small. Whenever thinking about what project to do next, don’t forget that there’s grandpa NTSC over there, and he still has got some tricks up his sleeve.

All of the source associated with this project is available on GitHub, and if you missed the video embedded above, here’s another chance to watch the demo.