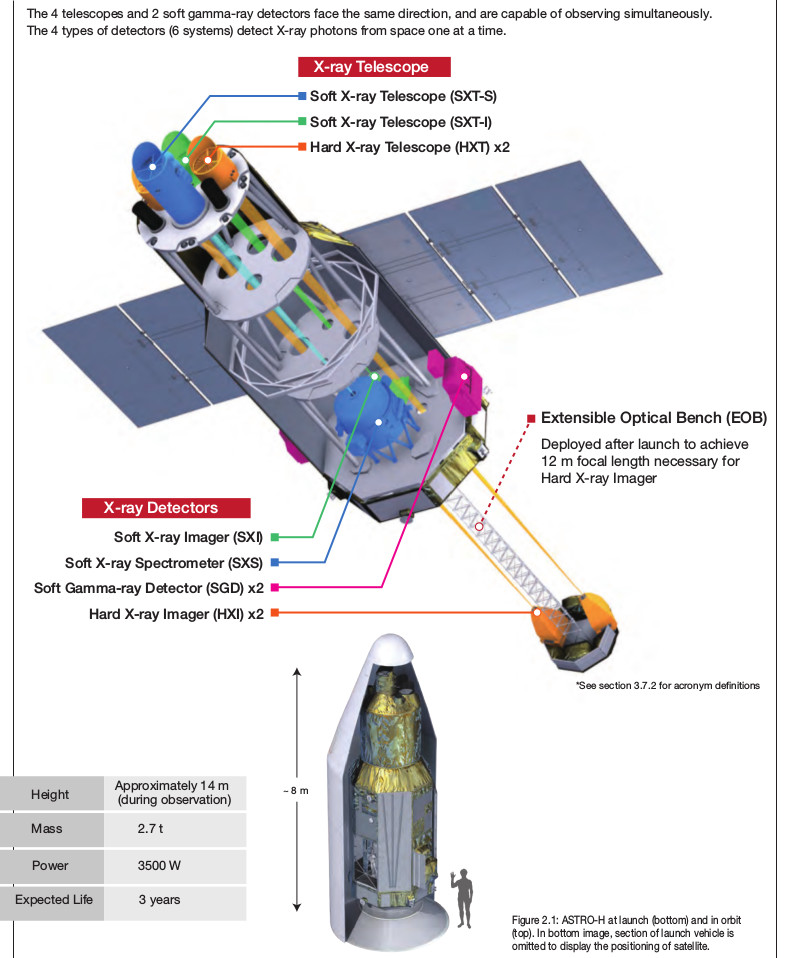 On March 26th, the satellite completed a maneuver to point at the galaxy Markarian 205. The Attitude Control System (ACS) began using the Star Tracking (STT) system data to control the position of the satellite. The STT at this point should have updated another position monitoring system, the Inertial Reference Unit (IRU). This may not have occurred.

At the time, the satellite was passing the South Atlantic Anomaly. This is important for two reasons. First, it placed Hitomi in a communications blackout region which meant there was no active ground monitoring of the situation (human intervention might have prevented the catastrophic failure). Second, the belts of radiation encircling the Earth dip low in this region so particle density is higher than in other parts of the orbit. High energy particles may have disrupted the onboard electronics.

The STT and IRU disagreed on the attitude of the satellite. In this case the IRU takes priority, but its data apparently was wrong, reporting a rotation rate of 20 degrees per hour, which was not occurring. The satellite attempted to stop this erroneous rotation using reaction wheels. The satellite configuration information uploaded earlier was wrong and the reaction wheels made the spin worse.

The satellite now went into “Safe Hold” mode and thrusters were called upon to stop the rotation. Using the same erroneous configuration information they increased the spin further causing the satellite’s rotation to exceed design parameters. Parts, like the solar sails, came off. In all, at least 5 pieces were observed in addition to the main body. Some reports indicate there may be as many as 10 pieces with 2 larger and 8 smaller pieces continuing in orbit. It’s likely that all ten pieces separated originally but their close proximity prevented visual and radar images from seeing them as separate entities.

In satellites, the STT typically gets a good fix and sends the data to the IRU. The IRU uses the data to set its current reading and to measure how far it drifted since the last update. After calculating the drift it uses drift adjustments to compensate for the future drift. Clearly if the compensation calculation is wrong the future readings are going to be wrong. This appears to have played a role since the ACS attempted to correct a rotation that didn’t exist. The erroneous configuration information led the ACS to aggravate, not correct, the rotation.

The hardware was built to study hard X-ray sources in the Universe. X-ray satellites like the Hitomi are not hindered by dust clouds that obscure visual instruments. Previous satellites have greatly expanded our knowledge of the Universe, with Japan as the leader in the technology.

Japan’s first successful X-ray satellite, Hakucho, was launched in 1979. Other successful launches followed in ’83, ’87, and ’93. Launches in ’76 and 2000 failed. Their most recent X-ray satellite, Suzaka, launched in 2005, was just decommissioned in 2015 due to deterioration of batteries and other components. It was hoped that Hitomi would see similar utility but that hope has now been extinguished.