Navid Gornall is a creative technologist at a London advertising agency, which means that he gets to play with cool toys and make movies. That also means that he spends his every working hour trying to explain tech to non-technical audiences. Which is why he was so clearly happy to give a talk to the audience of hardware nerds at the Hackaday Belgrade conference.

After a whirlwind pastiche of the projects he’s been working on for the last year and a half, with tantalizing views of delta printers, dancing-flame grills, and strange juxtapositions of heat sinks and food products, he got down to details. What followed was half tech show-and-tell, and half peering behind the curtain at the naked advertising industry. You can read our writeup of the highlights after the video below.

The client comes up to them and says, how can we make mayonnaise cool? So Navid’s job was to come up with a bunch of novel ways to make summer grillouts more fun. They started by mashing up a bunch of trends, and came up with “Burger Selfies” — a 3D printer that could take your picture and draw your face on a burger.

If you’ve never printed mayonnaise selfies before, you haven’t encountered half of the difficulties that Navid has. The issues started with getting a good outline of a person’s face suitable for mayonnaise portraiture. You know how you spend all your time levelling your 3D printer’s bed, and getting the first-layer Z-axis height just right? Navid was doing this with hamburger patties. They were aiming for a fully-automatic app-based solution. They ended up with a semi-automatic system where a skilled operator could make some tweaks along the way.

Needless to say, you can’t just go out and buy a mayonnaise extruder head. So Navid had to hack his own up (in a weeks’ time!). It turns out that mayonnaise is a non-Newtonian fluid, getting more viscous the harder you try to shove it through a tiny nozzle. Lesson learned, and a wider paste output solved the problem.

They chose a delta-bot because it features the client’s mayonnaise bottle dead center. It is an advertisement, after all. Much tweaking and learning to work with the material ensued. In order to get consistent prints, Navid cooked up ten burgers per day and re-used the flattest among them for his printing surface — washing it in the bathroom sink and then re-greasing it between attempts. (And you think it’s bad to have to wipe down your bed with acetone every now and then.)

With each iteration, the faces got more and more face-like. The bot was installed in a food truck, and they filmed it. All this work for a 30-second spot. But it looked great. 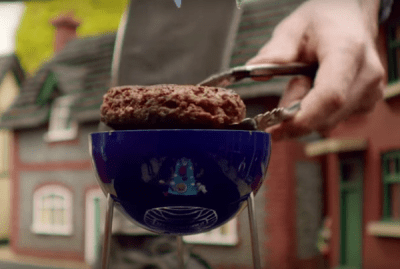 Then they had three days to create a demo of a custom mini-grill that would sear the manufacturer’s logo into a single burger while it’s cooking. Starting with a spray-painted 3D model, and fit with a custom grill built from what looks like brass tubing, they made a plausible fake. The client bought it, and it was shot. In the end, though, this project was more faking it than making it — the grill burned incense for the shoot, and the burger had the logo spray-painted on. But whatever works, right? And as a strange twist of fate, they may end up manufacturing the pint-sized grills later on.

Inspired by the Pyro Board, a variant of the Rubens’ tube, they decided to put the sweet flame display to good use, and grill some burgers, naturally. With multiple solenoid valves driving flame jets and some filtering and an Arduino, they got reactive flames, and got their footage shot.

Of course, the flames were way to high for reasonable grilling. While it may have looked great for the video, it “burned the shizz out of anything you put on it”. Of course, that’s nothing that a well-trained food stylist can’t handle, and they had a never-ending supply of non-burned “hero corn” they could throw at the shoot. Nothing’s what it seems, but everything looks good. That’s advertising!

We’re not sure why we’re suddenly hungry. Maybe there is something to this advertising after all. Anyway, thanks to Navid for giving us a look behind the scenes. What looks glossy and too-perfect in thirty-second spots turns out to have a hacky underbelly. Who knew?

27 thoughts on “Navid Gornall Eats His Own Face”