The typical sensors used for position control are a GPS receiver and an Inertial Measurement Unit (IMU) made up of an accelerometer, a gyroscope, and possibly a magnetometer (compass). Altitude control would require a barometer or some other means of measuring height above ground. Using sensor fusion techniques to combine the raw data, a computer can determine the position, movement, and altitude of the multicopter. But calculating corrections that will be just right, without over or undershooting the goal, is where PID comes into play.

We won’t discuss the sensors or fusion in this article, only the PID process since it is the widely applicable mainstay of control systems. We’ll use flying the copter manually to get an intuitive idea of how PID works. But keep in mind the example is illustrative and not 100% accurate since we humans do much more than simple PID when at the controls. 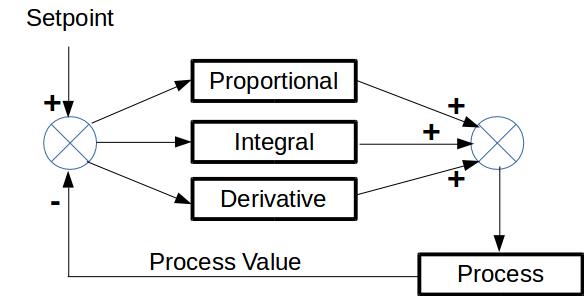 Let’s start with some terminology and symbol definitions for the math. The position where you want the copter to hover is the setpoint (SP). That’s 100 feet away. The current position is the process value (PV). That’s 110 feet after it drifted. The difference between the setpoint and the process value is the error (e). That’s 10 feet of drift. The output of the calculations are the control output (C), which in turn changes the control inputs to the system.

There are three parameters that control how a PID loop reacts to the error, one for each of the PID terms. These are call called gains and are Kp, Ki, and Kd for proportional, integral, and derivative, respectively.

Once again you’ve got the copter hovering nicely at 100 feet away with no control inputs. The wind picks up and it’s now at 110 feet. You add control input to bring it back. How much input? What if it had gone to 120 feet? You’d probably add more input for 120 feet than 110 feet because you want to get it back to 100 feet quickly. That is proportional control. The farther the copter moves away, the more input you use to bring it back.

The math is simple. Calculate the error as the difference between the setpoint and process variable and multiply the result by the proportional gain:

The table and chart show the movement of the copter away from the setpoint and the recovery. Notice that the copter stabilizes at 106 feet and not the setpoint. This offset is inherent to the math of proportional control.

The integral looks at the history of the errors over time by maintaining a summation of the error. The integral equations require a variable, the summation (Si), which is the sum of the previous errors each multiplied by Ki. The proportional component is calculated as above and added to the integral component.

An alternate form, more typically shown in discussions, maintains a summation of the errors and multiplies the summation by Kp. This form leads to a problem, called a bump, if the value of Kp is changed while the PID is operating. This probably won’t happen in our systems but is an issue for long running processes like in a refinery.

One potential problem with the integral is integral windup. If an extremely large error occurs or the setpoint is changed by a large amount the summation can build to a large value. This may result in a control value that exceeds the capabilities of a system. For a copter, the control value might attempt to drive the motors to 120% of their capability. Removing this accumulation can take a long time and can introduce overshoot, i.e. the copter returns to the 100 foot setpoint and keeps going. The two simplest ways of handling this are to either limit the value the summation can reach or to disable the integral until the process has stabilized. For our projects, limiting the summation is probably the easiest.

Again you start bringing the copter back from its position at 110 feet but you don’t know the strength of the wind. As the copter begins to return you watch how quickly it is returning and increase the input if the copter is not returning as quickly as you like. You’re judging the amount of distance the copter is covering. Another way of stating this is you are looking at the change in the error. That’s the derivative of the error.

The chart shows the movement of the copter under PD control. Here again, with no integral, the copter does not return to the setpoint but stops at about 104.5 feet, an improvement over P only. The time to a stable position is again around 12 seconds.

The next logical step is to show you a full PID but there is another factor to consider, the time between processing cycles. I left this out above for clarity. The equations above will work okay if the PID is processed at regular intervals, perhaps being driven by an interrupt. But if the interval is not constant an adjustment must be made to the integral and derivative calculations. This requires the use of the time elapsed between each PID calculation. This is the delta time (dt). After adding the dt factor, a minimal change, the PID control value is just the sum of the previous calculations:

The integral is now multiplied by dt. As a result, the summation is now the error over a period of time. If the time in error is long the integral becomes larger to more quickly force the copter back to the setpoint. If the time is small only a small correction is added.

Similarly, the derivative is divided by dt to amplify the control value.

The chart shows the full PID handling the copter deflection and return. Since the integral term is being used the copter returns to the setpoint and is stable at about 9 seconds. But it is reasonably close to the setpoint at 7 seconds, which is better than with the earlier approaches.

The dt I used is 0.5 seconds but when it was put into the chart the copter only moved to 105 feet. I doubled the speeds of the wind and copter so the movement was 110 feet to make it easier to compare all the charts.

Setting up a PID for optimal control of a process is a black art. Adjusting the three gains is tuning. Determining good PID gains is difficult because they interact and not always in a predictable manner. There are a number of papers and discussions that suggest how to tune a PID. The concept of auto-tuning has been around as long as PIDs but there is no universal way of doing this.

If you look at the gains in the four charts above you’ll see that each of them uses different values. These are the optimal values I could obtain for each set of calculations by experimenting with different gains. I had two goals. First, to get the copter stabilized as quickly as possible. Second, to not overshoot the setpoint. The first is almost always the goal in tuning. The second is arbitrary but it helped limit the number of tests I needed to do. Some processes like the copter can tolerate overshoots. Others cannot and an overshoot could actually result in damage to the overall system.

The code for a very basic PID class, at least enough to start you off, is a straightforward implementation of the equations. The class declaration is:

The actual class code for the constructor and calculation is:

I used this code to duplicate the results from my spreadsheet but wouldn’t turn it loose on a robot without more work. A more useful set of code is the Arduino PID library developed by [Brett Beauregard]. In his project blog, [Brett] explains the code, especially the changes introduced to make it more robust and useful. An interactive PID simulation based on [Brett’s] code is on [Raul’s] Coding Laboratory blog.

We’ve mainly considered the disruption to a system caused by environmental factors. The PID is also useful in changing the actions of a system. We positioned our copter with a setpoint of 100 feet away from us. The PID, actually multiple PIDs, interact to keep it at that location. The multiple PIDs are controlling the tilt, rotation, height, and bearing, correcting for errors as they occur. If we decided the copter should be 120 feet from us and 20 feet higher the controller may actually change the setpoints and let the PID correct the error to the new setpoint.

The PID is a workhorse for controlling systems that any hacker working with robots or other interactive systems should know. The example code here is just a starting point to provide a feel for how the algorithm works.