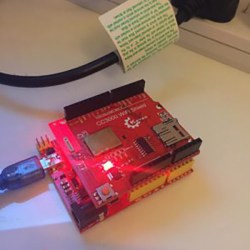 Originally a project to assess the Arduino as a possible IoT platform, [Steve] created a horrible practical joke called the Wake On Lan box. [Steve]’s flatmate was convinced Apple makes superior hardware because his fully charged Macbook would last all day. As hardware (not software, never software) engineers are wont to do, [Steve] decided to salt the apple orchard and play a practical joke on his friend with a device that would constantly send Wake On Lan packets to Apple devices.

With an Arduino and a TI CC3000 WiFi shield, [Steve] set up this stack of boards to send out a Wake On Lan packet – basically a broadcast MAC address to a broadcast IP address with a destination port of 9. You will note this device could send Wake On Lan packets to every device on a network. Don’t do that. What did the device accomplish? Evil, but it also taught [Steve]’s flatmate about the merits of power management.

Too many people on your network? Build a deauth box! This tiny device will look for DNS requests and responses on open WiFi networks. If certain keywords exist in the request or response, that device is deauthenticated from the network.

[Steve]’s Thunderblade deauth box is built around the Raspberry Pi Zero (yet another person in the pockets of Big Raspberry Pi, I guess), with a few lines of Python taking care of the job. Don’t build this device, either. 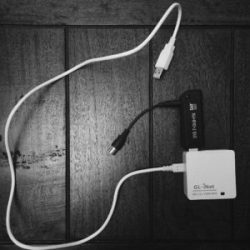 [Steve] was playing around with the RTL-SDR TV Tuner dongle, the best way to get started in Software Defined Radio. One of the big problems with these radio dongles is simply getting the signal to a computer. You don’t want to do long coax runs, and the connectors on these TV tuner dongles are universally terrible.

Instead of losing half the signal in 10 feet of cable, [Steve] is simply plugging the RF end of the dongle directly into an antenna, and the USB end into a cheap router running OpenWrt. Run the rtlsdr package on the router, and you can work your SDR over the network with zero loss over coax.

These are cheap, simple, and stupid devices, but they’re not as cheap as they could be. [Steve] has been working with the $2 ESP8266 WiFi Module, and this tiny chip could easily replicate the functionality of the $30, Arduino-based WOL box. Need a WOL box and a deauth box? That’s the same price. Building terrible electronics has never been cheaper, and the devices have never been more disposable. Just don’t do it around us.

22 thoughts on “The Terrible Devices Of The Internet Of Wrongs”