Open source is a moral imperative in the truest Kantian sense of the word. It is a good unto itself. Of course, this means open source is also mind-numbingly prescriptivist. Holy scrolls have defined dozens of different open source licenses. The relevant license for Open Source Hardware has already been laid out to define the freedoms and responsibilities of all Open Source Hardware creators. Open Source Hardware is a tangible thing, from a laptop to a lampshade, whose design is available so anyone can make, modify, distribute, and sell that thing. Native documentation is required, and software required to run this thing must be based on an OSI-approved license.

The definition of Open Source Hardware has been around for a few years now, and since then the community has flourished, there’s a great gear logo, and you can buy real, functional hardware that bills itself as Open Source Hardware. It’s become a selling point, and this has become a problem.

Many hardware creators don’t adhere to the definition of Open Source Hardware. In some cases, the design files simply aren’t available. If they are, they could be unmodifiable. The software used to create these design files could cost thousands of dollars per seat. This is the problem the movement faces — Open Source Hardware must have a certification program. Unlike open source software, where the source is almost proof enough that a piece of software complies with an open source license, hardware does not have such obvious assurances.

Software Is Closed By Default, Hardware Is Open And The Licenses Are Harder

The theoretical basis for the need of an Open Source Hardware license is the fact that anyone is able to manufacture hardware. Of course, there are limits to technology and no one has a 14nm silicon fab line in their garage. This is a problem for any piece of Open Source Hardware, and the technical capability for anyone to recreate integrated circuits and other high technologies is the sole source of the traditional objections to any open hardware license. Garage-based fabrication is always improving, though, but closed hardware in the form of NDA’d chips will remain a problem for years to come.

The clearest example of the problem with closed-source chips is bunnie’s Novena laptop. This laptop is designed as both a hacker’s laptop and an artifact of Open Hardware. Although most of the chips used in the Novena are available without signing NDAs, open source, and blob-free 3D graphics acceleration was unavailable when the laptop launched. This non-open graphics problem will be fixed with open source drivers, but it does illustrate the problem of Open Source Hardware. Even though chips might be available, there might be binary blobs required for full functionality. You can build an Open Hardware chip in VHDL, but it’s not really open if you have to use closed-source FPGA dev tools.

OSHWA’s solution to this problem is simply asking for hardware creators to act in good faith. The certification program won’t knock points off for using closed source binary blobs if that’s the only way of doing something. Open Source Hardware is just slightly more aware of the pace of technical progress, and what is closed today may be open tomorrow. Building a piece of Open Source Hardware isn’t an all or nothing proposal; just give your best effort to make it open, and technology or reverse engineers will probably make it more open in the future. 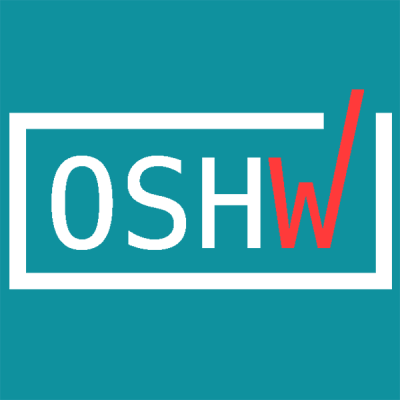 The old Open Source Hardware ‘gear’ logo — unquestionably a better logo — will still remain in use, and no one is going will look down on you for using it. Using the trademarked OSHW logo, though, is the only way any certification program can be enforced.

The Objections To Open Source Hardware

You need only look back on the last twenty or thirty years of the world of Open Source Software to get a sense of where Saar and Dave are coming from; Stallman does not believe in a moral imperative to Open Hardware, whereas most everyone in attendance of today’s Open Hardware Summit does. Gnome versus KDE is nothing compared to the religious war we potentially face between various Open Hardware philosophies. The Open Source Hardware community is relearning what the open source software community learned twenty years ago. We can only hope to learn from their missteps.

But Open Source Hardware has a much bigger obstacle to adoption than politicking and empire building. Open source software is a simple concept — you have a (copy) right to whatever software, music, words, or boat hull designs you create. You can, therefore, give others the right to use, study, share, and modify that work. Physical objects and artifacts do not have copyright, they have patents. Patent law in the United States is atrocious, and just because you were the first to create a useful invention doesn’t mean a patent would be invalidated. This is the greatest challenge to anything developed as Open Source Hardware. The only solution to this is prior art and patent inspectors that know where to look.

This Will Take a While to Work Out

The Open Source Hardware Certification program is going to take a while to unravel. OSHWA doesn’t believe this certification program will be a repository used by patent inspectors looking for prior art. The legal basis for the certification is literally built upon every piece of intellectual property law. It is, perhaps, an answer to the most complex legal questions ever: what is property, what is intellectual property and can the concept of physical things be given away.

None of this matters unless the community gets behind it, and if another competing Open Source Hardware certification or license pops up, the community may very well migrate to that. Judging from the last thirty years of open source software license drama, we can only hope that the community figures this out the first time, and we hope this certification program is a rousing success.