A recurring idea in hackspaces worldwide seems to be that of the vending machine for parts. Need An Arduino, an ESP8266, or a motor controller? No problem, just buy one from the machine!

Most such machines are surplus from the food and drink vending industry, so it’s not unusual to be able to buy an Arduino from a machine emblazoned with the logo of a popular chocolate bar. These machines can, however, be expensive to buy second-hand, and will normally require some work to bring into operation.

A vending machine is not inherently a complex machine nor is it difficult to build when you have the resources of a hackspace behind you. [Mike Machado] is doing just that, building the Vendotron, a carousel vending machine constructed from laser cut plywood and MDF. The whole thing is controlled by an Arduino, with the carousel belt-driven from a stepper motor.

It’s not doing anything commercial vending machines haven’t been doing for years, except maybe having a software interface that allows phone and Bitcoin payments. Where this project scores though is in showing that a vending machine need not be expensive or difficult to build, and broadening access to them for any hackspace that wants one.

We’ve had a few vending machines here before, like this feature on the prototyping process for commercial machines, or even this one that Tweets. Sadly few have a secret button to deliver a free soda though. 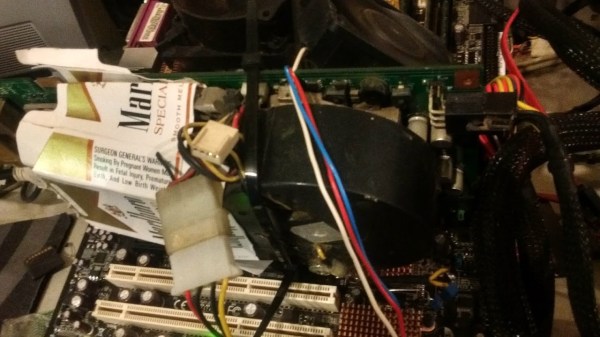 A fun thread over at the EEVblog forum starts off with [TerraHertz]’s triangle-peg, square-hole capacitor repair job and goes entertainingly down-hill from there.

Everything from horrifying eBay purchases to work (horror) stories can be found in this thread. But you can learn something too. Did you know the correct way to fix a mercury switch stored in the incorrect orientation is to whack it against a table really hard?

We enjoyed the cigarette box shroud used to fix a graphics card with a defective fan. We’re still not sure about the person who managed to Dremel bits off a graphics card and end up with a working PCI-e card. That one may be a troll.

Regardless, it’s a lot of fun, spanning the hilariously bad and the seriously impressive. We would not be surprised if some of these people met the devil at the crossroads for some soldering skill. Do any of you have an interesting or ugly repair to share? We’d love to see it.

END_OF_DOCUMENT_TOKEN_TO_BE_REPLACED

[Nicomedia] (a team of two) built a payload for their drone with two distinct purposes: to allow it to drop things like rose petals and to fire off fireworks. Honestly, while it is a cool idea, we are a little worried that dropping things from a height might not be a good idea (although rose petals are probably OK) and lighting off fireworks from a drone didn’t seem like a good idea at all. If you want to reproduce this, you probably need to make sure either of these things are legal in your part of the planet.

In the video below, you can see the effect. A servo tied to the drone’s controller opens the box to release the payload. In this case, the team didn’t have a spare channel so they used a separate controller, but if you had a spare channel on the flight controller, that would probably be better.

END_OF_DOCUMENT_TOKEN_TO_BE_REPLACED

If you deploy a lot of Raspberry Pi computers, you might find it inconvenient to log into each one to perform different tasks. Orka, an open source project by [Karthik K], is a server that runs on a desktop PC (Windows, Linux, or Mac) and can control multiple Orka clients (that can run on a Pi, or a desktop PC). We understand that [Karthik K] is looking for Mac testers, by the way.

From the server, you can execute commands and create tasks. You can also receive notification when a client PC reaches a threshold (for example, over temperature or too much CPU or RAM usage). You can open a shell on a client and do other operations.

END_OF_DOCUMENT_TOKEN_TO_BE_REPLACED 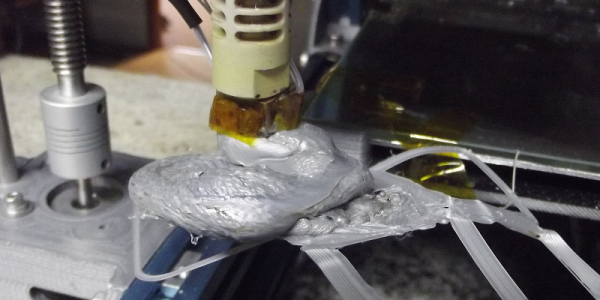 I’m guessing most of the members of the Hackaday community are what most people would consider early adopters. Sure, there’s variation among us, but compared to the general population we probably all qualify. I’ve spent many years being an early adopter. I owned a computer, a TiVO, a digital camera, a 3D printer, a drone, and many other gadgets before they became well known. I’ve avoided the self-balancing conveyance craze (I’ll stick with my motorcycle).

Of course, you know if you are an early adopter, you will overpay. New has a premium, after all. But there is another price: you often have the first, but not the optimum. My first digital camera took 3.5 inch floppies. My TiVO has an analog tuner.

I was reminded of this last week. A number of years ago, I built a 3D printer. A lot of printers back then didn’t have heated build plates, so printing ABS required rafts and ABS juice and frustration. I made sure to get a heated bed and, like most people in those days, I had a glass print surface covered in Kapton.

That works pretty well with ABS, but it isn’t perfect. Aqua Net hair spray makes it stick better, but large flat prints still take a little work. With a little practice, it isn’t bad. I eventually switched to an aluminum bed and didn’t have to level the head quite as often, but it didn’t really make things any better, just more repeatable.

The years pass and other gadgets beckon. I use the printer about like I use a drill press. I don’t use it every day, but when you need it it is handy. I have to admit, I’ve been getting partial to PLA since it doesn’t warp. But PLA in the hot Houston sun isn’t always a good mix, so I still print a fair amount of ABS.

The other day I noticed a product called BuildTak. I also heard some people are printing on PEI sheets. I decided to try the BuildTak. Wow! What a difference.

END_OF_DOCUMENT_TOKEN_TO_BE_REPLACED

If you’ve played around with “white” LEDs, you already know that there’s no such thing. There’s warm white and cool white and any numbers of whites in-between. And when white LEDs were new, the bluer “cool white” variety were significantly more prevalent.

Enough US states have swapped out their old street lights with LEDs that it may be having a measurable effect on people and on the animals around us. This is the claim in a recent position paper by the American Medical Association’s Council on Science and Public Health. (Report as PDF.)

Science strongly suggests that heavy doses of light can keep people from falling asleep, and that brighter LED streetlamps may be making the problem worse. The AMA report goes a step further, and pins extra blame on the color of the light. Blue light apparently suppresses the production of melatonin which helps you sleep at night. And it’s not just humans whose circadian rhythms are getting messed up — the effects are seen throughout the animal kingdom.