Even when we share the design files for open source hardware, the step between digital files and a real-world mechatronics widget is still a big one. That’s why I set off on a personal vendetta to find ways to make that transfer step easier for newcomers to an open source mechantronics project.

Today, I want to spill the beans on one of these finds: part numbers, and showcase how they can help you share your project in a way that helps other reproduce it. Think of part numbers as being like version numbers for software, but on real objects.

I’ll showcase an example of putting part numbers to work on one of my projects, and then I’ll finish off by showing just how part numbers offer some powerful community-building aspects to your project.

A Tale Told with Jubilee

To give this idea some teeth, I put it to work on Jubilee, my open source toolchanging machine. Between October 2019 to November 2020, we’ve slowly grown the number of folks building Jubilees in the world from 1 to more than 50 chatting it up on the Discord server. END_OF_DOCUMENT_TOKEN_TO_BE_REPLACED

If you miss the days you could get an organizer that would — sort of — run Linux, you might be interested in Popcorn computer’s Pocket P. C., which was recently open-sourced on GitHub. Before you jump over to build one, though, there are a few things you should know.

First, the files are untested since the first unit hasn’t shipped yet. In addition, while the schematic looks pretty complete, there’s no actual bill of materials and the PCB layers in the PDF file might not be very easy to replicate, since they are just a series of images, one for each layer. You can see an overview video of the device, below.

END_OF_DOCUMENT_TOKEN_TO_BE_REPLACED

With open source software, we’ve grown accustomed to a certain level of trust that whatever we are running on our computers is what we expect it to actually be. Thanks to hashing and public key signatures in various parts in the development and deployment cycle, it’s hard for a third party to modify source code or executables without us being easily able to spot it, even if it travels through untrustworthy channels.

Unfortunately, when it comes to open source hardware, the number of steps and parties involved that are out of our control until we have a final product — production, logistics, distribution, even the customer — makes it substantially more difficult to achieve the same peace of mind. To make things worse, to actually validate the hardware on chip level, you’d ultimately have to destroy it.

On his talk this year at the 36C3, [bunnie] showed a detailed insight of several attack vectors we could face during manufacturing. Skipping the obvious ones like adding or substituting components, he’s focusing on highly ambitious and hard to detect modifications inside an IC’s package with wirebonded or through-silicon via (TSV) implants, down to modifying the netlist or mask of the integrated circuit itself. And these aren’t any theoretical or “what if” scenarios, but actual possible options — of course, some of them come with a certain price tag, but in the end, with the right motivation, money is only a detail.

END_OF_DOCUMENT_TOKEN_TO_BE_REPLACED

Join us Thursday at noon Pacific time for the Flexible PCBs Hack Chat with Drew and Chris from OSH Park!
Note the different day from our usual Hack Chat schedule!
Printed circuit boards have been around for decades, and mass production of them has been an incalculable boon to the electronics industry. But turning the economics of PCB production around and making it accessible to small-scale producers and even home experimenters is a relatively recent development, and one which may have an even broader and deeper impact on the industry in the long run.

And now, as if professional PCBs at ridiculous prices weren’t enough, the home-gamer now has access to flexible PCBs. From wearables to sensor applications, flex PCBs have wide-ranging applications and stand to open up new frontiers to the hardware hacker. We’ve even partnered with OSH Park in the Flexible PCB Contest, specifically to stretch your flexible wings and get you thinking beyond flat, rigid PCBs.

Our Hack Chats are live community events in the Hackaday.io Hack Chat group messaging. This week we’ll be sitting down on Thursday, May 23 at 12:00 PM Pacific time. If time zones have got you down, we have a handy time zone converter.

Click that speech bubble to the right, and you’ll be taken directly to the Hack Chat group on Hackaday.io. You don’t have to wait until Thursday; join whenever you want and you can see what the community is talking about. 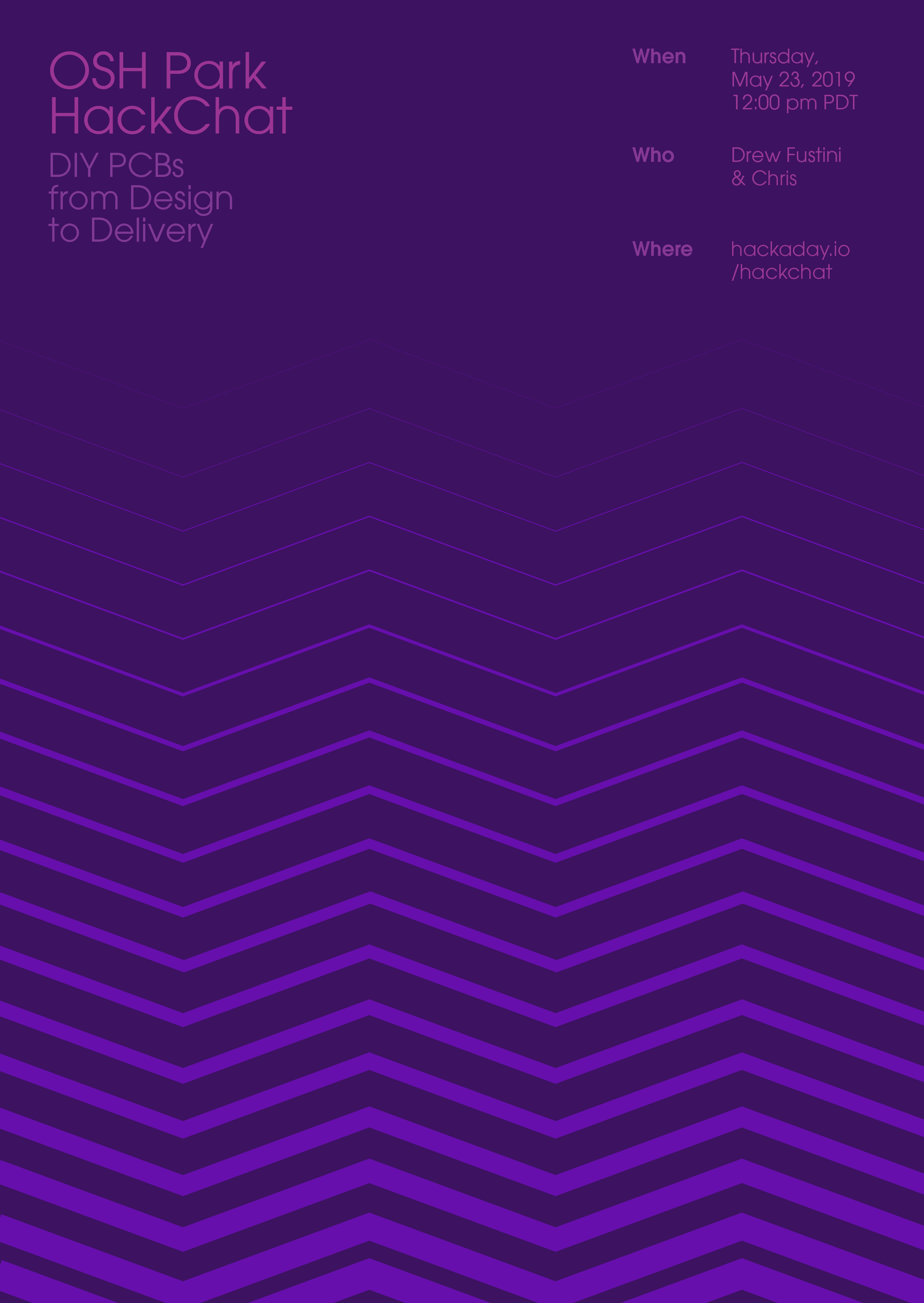 While we’ve come a long way in terms of opening up the world of radio control to open source software, a good deal of the hardware itself is still closed up. You can flash a cheap RC transmitter with a community developed firmware, in fact there’s a decent chance that’s what it ships with, but the hardware itself is still an immutable black box. That might be fine if you’re just flying an RC plane or quadcopter, but what if you’ve got something a bit more advanced in mind?

To address this issue, [Alireza Safdari] has spent the last several years working on a truly open source RC transmitter that can be modified and augmented to meet the user’s needs, called the Alpha V1. With the hardware and software nearing completion, he’s looking to get some community feedback on the system before the planned crowdfunding campaign kicks off.

From his personal experience, [Alireza] found that traditional RC transmitters have their limits when you start using them for robotics. You’ll often want input schemes or devices which would never occur to the remote’s designers, and you’ll almost certainly want to have more channels and functions than the original hardware will allow. One of the big advantages with the Alpha V1 is that the front and back of the controller are simple acrylic panels, meaning you can easily cut openings or drill holes in them to add more hardware without having to deal with the (relatively) ergonomic shapes of a traditional transmitter.

Of course, that’s only one half of the equation. When you add new hardware, you’ll need to make the software aware of it. To that end, [Alireza] says he and his team have developed a library of adaptable firmware modules which should make it very easy to add in new components without having to get bogged down with software configuration. In fact, he says the goal is to allow the user to add new hardware to the Alpha V1 without requiring them to write a single line of code.

The Alpha V1 communicates at 2.4 GHz using either XBee or Murata DNT24 radios, and supports as many as 72 individual channels as well as two-way telemetry. If your requirements aren’t quite so high, we recently covered a significantly less intimidating attempt at building an open source RC transmitter that might suit your needs.

Graphing calculators are one of those funny markets that never seem to change. Standardized testing has created a primordial stew of regulatory capture in which ancient technology thrives at modern retail prices while changing little. The NumWorks calculator certainly isn’t the first competitor to challenge the Texas Instruments dynasty with a more modern interface (and a design from this decade), but behind it’s subtle color pops and elegant lines lies the real gem; a fantastically well documented piece of open source hardware. The last time we wrote about the NumWorks, it was to demonstrate a pretty wild hack that embedded an entire Pi Zero but it’s worth drawing attention to the calculator itself.

Hackaday readers traveling to the NumWorks website might spy the section at the bottom of the page titled “Developers” with tantalizing links like “Hardware,” “Software,” and “GitHub.” These lead to a wealth of knowledge about how the product is put together and sources to build the enclosure and firmware yourself (the PCB schematic and layout sources seem to be missing, though there is this handy gerber viewer). However merely posting sources is a low bar NumWorks far exceeds.

How is the firmware put together? Here’s a handy architecture guide! Why did they choose C++ and what tradeoffs were made to fit everything in a resource constrained embedded system? Here’s a design guide! How exactly does the math engine take in text, comprehend the expression contained therein, and evaluate it? There’s a document for it! There’s even a multi-platform SDK setup guide.

Firmware documentation is old hat; we’ve come to expect (or at least hope!) for it. For us the most interesting documentation is actually for the mechanical and electrical systems. The EE guides start with part selection (with datasheet links) then move on to walkthroughs of major areas of the schematic. At this point is should be no surprise that the board has pads for a completely standard 10 pin ARM debug connector and documented test points for UART, SPI, and an SD card.

The mechanical pages read like a quick primer on design for injection molding and tricks to reduce assembly errors (called “poka-yoke“). Ever wondered what that funny frame plastic models come in is called? The NumWorks calculator’s buttons are made in one, and it’s called a “sprue”. There are pages describing each piece of the housing one at a time.

Treat yourself to a reading of NumWorks’ excellent documentation. And if you need a new calculator, maybe consider the open source option.

END_OF_DOCUMENT_TOKEN_TO_BE_REPLACED

The Open Source Hardware Association is now accepting applications for the Ada Lovelace fellowship which provides free admission to the Open Hardware Summit and a $500 travel stipend. One of OSHWA’s goals is to foster a more diverse community within open source. As part of this, Ada Lovelace Fellowships are open to women, LGBTA+, and people of color. There are a total of 10 fellowships available and applications are due by April 30th. The Open Hardware Summit will be held on September 27th at MIT.

Disclaimer: [Christopher Wang] is a board member of the Open Source Hardware Association