What does it take to go from concept to dropping a finished product into the hands of the end user? Gather ’round for a story that pulls people and parts from around the world to make one killer piece of hardware art.

Hosting a conference about hardware creation presents an excellent opportunity to build a hardware badge. But the bar is set pretty high — everyone looking at it will notice all the telltale signs of design choice, component selection, and manufacturing process. Luckily we had a great team working on the Hackaday SuperConference Badge and it turned out magnificently. Let’s look at what it took to get there.

We already had a proven user interface from the Hackaday Belgrade conference. It was so interactive, and adopted with such joy, that it made a great starting platform for the SuperConference. All of the good was kept from that first iteration, but many changes were made to build the pleasing aesthetic that we arrived at.

[Voja Antonic] is the badge designer. He developed a striking badge shape, and laid out a visually fascinating LED matrix with the parts at a 45 degree orientation to the sides of the board. The battery holders were mounted straddling the edges of the board, and the matte black silk screen, button colors, and silk screen color all worked with each other. No, this product doesn’t have an injection molded case or other enclosure — some might think it an incomplete story of manufacturing without one. But the beauty of the hardware design would be lost if covered up.

After sending out the initial prototypes back in June, we had a winner and it was time to move toward manufacturing. If you find yourself longing for more details on the badge design check out [Voja’s] article on the topic.

Gathering the Materials and Finding a CM

[Chris Gammell] jumped in to drive the production effort. His first task was to review the Bill of Materials from [Voja] and this raised some question marks. [Voja] lives in Belgrade, Serbia and had selected parts that were only available from one supplier: Comet Electronics in Belgrade. This includes a few difficult to replace items (at least without changing the design) like the buttons and the constant current LED driver.

The decision was made early to minimize the number of single-supplier parts, carefully check stock, and make sure we had the parts in hand in time for manufacturing. The majority of the components are stocked by numerous distributors — stock counts and price were carefully considered when choosing Digikey for the rest of the order.

Assembling 300 boards is an interesting challenge. Contract manufacturers handle orders of 300 boards all the time, but normally they are not as complex as this badge. [Chris] reached out to multiple CMs for quotes and narrowed down the field. We ended up going with our friend [Bob Coggeshall] who is the founder of Small Batch Assembly in the Washington DC area. [Bob] is a friend of Hackaday — we interviewed him about his role in inventing the unix ‘sudo’ command a couple of years ago and have run into him several times since. It’s nice working with people you know. 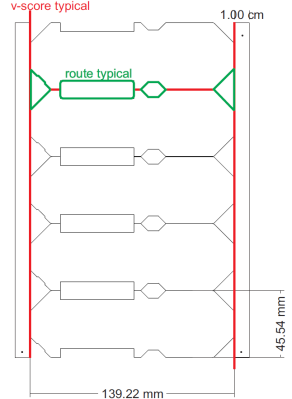 [Bob Coggeshall] jumped right in, working to get the design ready for the smoothest possible production techniques.

His first step is to review the solder paste Gerber files. These tell him which areas of the board have tight tolerances and may prove difficult. In our case there are two: the accelerometer and the USB connector. The accelerometer is an LGA-16 footprint with 0.5mm pitch (Small Batch Assembly’s limit is 0.45mm) and the USB connector is a through-hole part which will require intervention by hand for every part. After discussing concerns with [Chris] and [Voja], we decided to move ahead with the process.

Next up is panelizing the PCB files. [Bob] bases this on the limit of his equipment — his reflow oven decides the max panel size. Next he sent the panelized file off to his friend [Rocky] at MG Circuit to ensure his plan of through-routed and v-scored panels was understood. This is a clever way to do things, since it allows boards with interesting outlines to be designed but the 4-edges with v-score still hold the panel together while being simple to separate after population.

The boards arrived looking fantastic, and during the wait [Bob] had already programmed his pick and place for the task — a process that took an entire day. His first order was to assemble one single panel. This was shipped to [Voja] for testing. Good news everyone, the panel performed magnificently. Time to head for full production!

That complexity mentioned earlier? Every board had to have solder applied with a stencil, parts placed by machine, a trip through the reflow oven, and inspection… twice, since it needs to happen for both sides of the board. The back side was populated first, the front side, with 128 LEDs and various other parts came second. That front side took four minutes per badge (twenty minutes per panel) to pick and place. Complexity comes in the form of 50,000 parts placed on the 300 boards, an assembly time of about 30 hours all-in.

Assembled badges were shipped to the Supplyframe Design Lab in Pasadena about two weeks before the SuperConference. These came as five-to-a-panel units and required several steps of final assembly.

First, boards needed to be depanelized … a simple matter of applying some force to the v-scored areas. Because they had been on panels, the edge-mounted battery holders weren’t yet populated. [Voja] set to work hand-soldering 600 of the AAA battery holders (two per boards).

Next came flashing the firmware and testing every single board. Failure rate was about 7.5%, with the accelerometer being the culprit most of the time. This was one of the two ‘trouble’ parts [Bob] raised at the start — the fine pitch makes solder paste alignment critical and the package has no visible leads so visual inspection is impossible (you’d need to use X-ray). [Chris Gammell] reworked these by lifting the chip with hot air, hitting it with a flux pen, and reapplying again with hot air. This got almost every defect board working.

Continuing with mechanical assembly, we added the acrylic bezel which adds rigidity to the battery holders, and looks great. The Design Lab has a laser cutter so fabbing these bezels was the easy part. The problem is that laser-cut acrylic has a coating which needs to be removed from both sides and these parts are super narrow making it hard to peel. [Marco] spent most of a day removing the film and working with [Dusan] to super-glue them in place. The next wrench in the works was the lanyard clips which were too large for the hole in the PCB. The solution was to use pliers to open the eyelet, removing the clip and inserting the badge before closing it again.

The final step was to reflash each badge with a unique serial number which would serve as the gate-keeper for the IR communications.

It’s pretty amazing that this came together, and the tale of manufacturing wouldn’t be complete without looking at some of the ways we tilted the scale in our favor.

We set out with a BOM cost goal of $20 including assembly. There are many ways to bend the numbers but a reasonable fence-sitting estimate is that we overshot that by around 20%. But that number doesn’t include some of the costs which we didn’t have to directly pay: the cost of the hardware design, a project manager, and final assembly and testing are not included. Also, Small Batch Assembly gave us the “Friends of Hackaday” rate which we were very happy to get. And our friends at Microchip, Garrett Scott specifically, threw in their time and talent to upgrade our bootloader to work as a USB mass storage device.

These extra costs that aren’t included in the bottom line but they all tied in to make this project magic. Most conferences don’t have the latitude to take on something this risky, but Supplyframe made these badges a priority and that let use roll the dice and make it happen.

Anyone who attended the SuperCon will agree, this was all worth it. The badge we have is a beautiful piece of electronics that shows our love for the design, the process, and the culture that go into hardware creation. It’s the perfect embodiment of what Hackaday is all about, and sharing the process here is a continuation of that spirit.

15 thoughts on “A Tale Of Electronic Manufacturing”