Decorating for the holidays is serious business! Finding themselves surrounded by neighbours who go big, redditor [wolfdoom] decided that this was the year to make a strong showing, and decided to build an oversized pixel LED display. 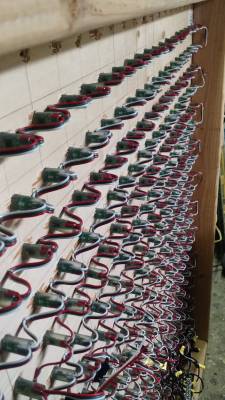 Demonstrating resourcefulness in their craft, [wolfdoom] found an old fluorescent light grid pattern to prevent bleed from one pixel to the next. Reusing this grid saves many hours of precision-cutting MDF — to be substituted with many hours of cutting the plastic with decidedly more room for error. Attaching the resulting grid to a sheet of plywood, and 576(!) drilled holes later, the LEDs were installed and laboriously wired together.

A Plastic light diffusing sheet to sell the pizel effect and a little help from their local maker space with the power circuit was enough to keep this project scrolling to completion — after the requisite period of basement-dwelling fabrication.

Despite some minor demotion attributed to a clumsy daughter, the massive 4×4 display remained a suitably festive decoration. For now the control system remains in [wolfdoom]’s basement, but with plans to incorporate it into the display’s frame down the road.

One of the more interesting LED matrix builds we saw this year is the one that uses 1575 beer bottles. For a more interactive holiday decorations, Halloween usually takes the cake — like this animated door knocker.