There’s a new challenger on the block for the title of the “Worlds Smallest 4x4x4 RGB LED Cube“. At 13x13x36 mm, [nqtronix]’s Cube Pendant is significantly smaller than [HariFun’s] version, which measures in at about 17x17x17 mm just for the cube, plus the external electronics. It took about a year for [nqtronix] to claim this spot, and from reading the comments section, it seems [HariFun] isn’t complaining. The Cube Pendant is small enough to be used as a key fob, and [nqtronix] has managed to really cram a lot of electronics in it.

The LED’s used are 0606 RGB’s which are 1.6mm square, although he did consider using 0404’s before scrubbing the idea. There’s many ways of driving 192 IO’s, but in this case, Charlieplexing seemed like the best solution, requiring 16 IO’s. Unlike [HariFun]’s build, this one is fully integrated, with micro-controller, battery and everything else wrapped up in a case made entirely from PCB — inspired by [Voja Antonic]’s FR4 enclosure technique, and the LED array is embedded in clear resin. 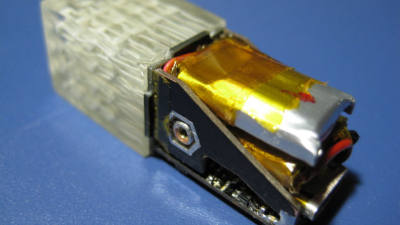 Along the way, he’s had to resort to several hacks to bring it to fruition. For starters, he’s used the ATmega328BP [pdf], instead of the more usual ATmega328P, giving him extra IO’s to play with. And since Charlieplexing works better at higher voltages, he’s using a boost converter to provide +5.5V — the max. limit for the ATmega — to drive the cube. The LiPo charger has a slightly unusual P-MOSFET switching section to switch between USB input and LiPo without causing too much of a voltage drop. There’s a few parts to help detect low voltage, but his code doesn’t yet use this feature.  He’s also thrown in an accelerometer in to the mix to respond to taps, double taps and shakes, but this too is not yet implemented in code. Since he ran out of board space, the EEPROM is dead-bug soldered. And the push button is built from, well, pulling apart a regular push button and using its innards. He’s posted the DIPtrace board design files as well as the code on the Instructable, in case some one else wants to take a stab at replicating the cube. Although we must say that apart from being a soldering Ninja, you also need pretty good mechanical chops to build this tiny cube.