You have a shoe box sized computer that you want to use in a Mars fly by. How do you communicate with it? The answer is a very clever set of antennas. I got to sit down with Nacer Chahat, one of the engineers on the Jet Propulsion Laboratory team responsible for antenna design on Mars Cube One (MarCO). Two of these CubeSats that will soon be used to help a lander reach Mars. We talked about the work that went into MarCO, the deployable radar antenna he’s worked on for the RainCube project, and the early progress on OMERA, the One Meter Reflectarray.

This is a fascinating discussion of dealing with a multitude of engineering challenges including lack of available space for the antenna components, and power and weight limitations. Check out the video interview to see how the people at JPL fit it all into this, and other tiny satellites, then join us below for more details.

It is difficult for vehicles on the surface of Mars to communicate directly with Earth, but much easier for satellites in Mars orbit to do so. There is already one large satellite orbiting the planet, the Mars Reconnaissance Orbiter (MRO) which entered orbit in 2006. It is in contact with Earth but sometimes doesn’t have line of sight because it is behind Mars. This means windows of time when communications are not available.

NASA plans to launch InSight — a lander that will dig below the surface of the red planet — in 2018. Two 6U CubeSats will be along for the ride, separating from the rest of the payload as they approach Mars. These satellites will communicate with InSight during entry descent and landing on UHF, and communicate back to Earth on X-band. This is an important because the MRO will be behind Mars during that time, unable to perform this task.

The ‘Bent Pipe’ refers to the ability of these CubeSats to be in contact with both the lander and Earth, relaying data in real time at the same rate it is received from the lander. Once the lander has touched down the MarCO satellites will have performed their task and will fly by the planet, but will not enter orbit.

This is a fascinating development for several reasons. Currently, the MRO is capable of both UHF and X-band communications but not at the same time. The CubeSats, which are cheaper and faster to build, can communicate on both bands at the same time and will provide the data relay during InSight’s EDL.

A Very Small Target a Very Long Distance Away

On average, Mars is about 225,000,000 kilometers away from earth. The communication link JPL is building between the two is the size of a shoebox. A 6U CubeSat measures about 10x20x30 cm. This is an incredible engineering challenge. The satellites need to be self sufficient, able to orient themselves correctly, be able to survive the trip from one planet to another, and have the radio equipment necessary to communicate over that distance. This is where the team Nacer works with comes into the picture.

Antenna engineers and mechanical engineers work together with the rest of the CubeSat teams to design and build the communications array. In this case, a brand new radio called IRIS was developed to help meet the power and size constraints. There almost no room inside the vehicle left for an antenna array so the reflectors were built to fold flat on the outside of the vehicle. The UHF antenna, which communicates with the Mars ground vehicles, sits flat on the bottom of the satellite but pops out like a jack-in-the-box. 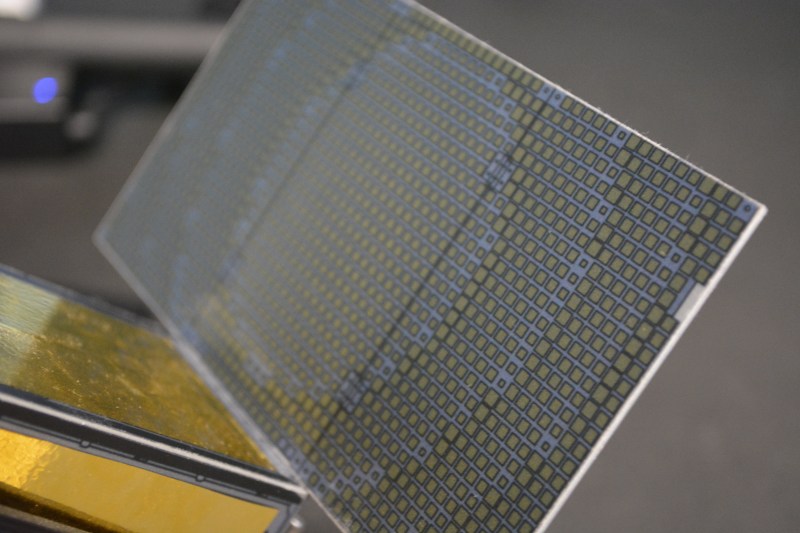 The X-band antenna that transmits back to earth folds into three panels. When deployed, the reflector array is wider than it is tall so the signal source also has an array to utilize the full reflector. Interestingly, the pattern you can see on the reflector array helps the flat panels act more like a parabolic reflector. MarCO is also capable of receiving X-band from Earth using the array seen on the front face of the folded model above. These CubeSats are unable to transmit on the UHF band, they only receive the UHF communications from ground vehicles.

I originally met Nacer after I toured NASA’s Jet Propulsion Laboratory back in December. I had marveled at the deployable antenna for SMAP — a full sized satellite — and he contacted me to mention how awesome deployables are in these CubeSats. He wasn’t kidding. He has also worked on the RainCube project which will orbit earth collecting precipitation data using radar.

RainCube includes a 0.5 meter parabolic reflector for Ka-band operation. The reflector still needs to fit inside the 10x20x30 cm satellite. Specifically, the design team was allotted a 10x10x15 centimeter storage area for the reflector and the arm that holds the subreflector.

The result is this fantastic two-stage parabolic reflector which extends out of the canister at one end of the CubeSat and then unfolds a second stage. The subreflector arm then pops out to the appropriate position, about 0.24 meters from the main reflector. A demonstration of the deployment is shown during the video interview.

You Call That a Challenge?

It seems that a half-meter reflector isn’t a big enough challenge for the JPL team. They are now working on a project called OMERA. I could find very little information available for this project so I am happy that Nacer was able to share. This acronym stands for the One Meter Reflectarray, a square reflector that measures one meter on each side.

The team has just finished building a fixed model of the reflector design and you can see Nacer posing with the OMERA prototype in one of JPL’s anechoic chambers. This prototype doesn’t fold, but having proven the RF properties of the system the next step is for the mechanical engineers to add hinges to the fifteen panels and develop a deployment system. The feed for this reflector array needs to extend about 0.7 meters from the array which is itself no small feat. This operates on the Ka-band so the surface accuracy is much less forgiving than with X-band communications.

The work going into these CubeSats is fantastic! It’s amazing to see both the constraints that these engineers face and their solutions. The programs cost less to see through than ever before, which we hope means more hardware in less time. It also has the effect of energizing the engineers like Nacer who work on these programs as everywhere you turn there is a new and exciting challenge to take on.

If you’re part of your own awesome engineering project we’d love to talk to you too. Make sure to let us know what you’re up to by contacting us on the Hackaday Tips Line.